Tunnelling works for CCL6, which consists of three new stations – Keppel, Cantonment and Prince Edward Road – started in August 2019. Three TBMs were used to construct the three stretches of twin tunnels linking the new stations to the rest of the Circle Line. The first stretch of tunnelling works from Keppel station towards HarbourFront station was completed in August 2020. The TBMs were then re-launched to mine between Keppel and Cantonment stations. Works for this leg were completed in July 2021.

The final stretch of works, which includes the boring of 2km long twin tunnels from Prince Edward Road station to Cantonment station, was completed today, marking the completion of CCL6 tunnelling works. With this, the progress for CCL6’s civil construction works is about 55% complete.

Moving forward, works will commence to build the structural connections between the bored tunnels and stations. This will be carried out in tandem with the rest of the structural works for the three new underground stations for CCL6.

Upon the completion of the basic civil structural works, the installation of track-related equipment as well as electrical and mechanical services and systems will commence, followed by systems testing and commissioning.

The CCL6 is on track to open in 2026, closing the Circle Line loop by connecting HarbourFront to Marina Bay stations. This will provide commuters in Telok Blangah a more direct, faster and more convenient route to the Marina Bay area, cutting travelling time by up to 10 minutes. Commuters travelling from Paya Lebar and Mountbatten will enjoy faster access to the retail and office centres in the HarbourFront area, and those in the west such as Pasir Panjang and Kent Ridge can also have a direct route to the Central Business District.

The CCL6 tunnelling works had to be planned and undertaken carefully as they were carried out beneath heritage buildings and close to the foundations of many existing commercial buildings and road infrastructure in the densely built-up Central Business District. At the sections which interface with the existing HarbourFront and Marina Bay stations, precautions were also taken to avoid affecting daily train operations.

One example is the tunnels between Prince Edward Road and Cantonment stations which cross under the former Tanjong Pagar Railway Station – a gazetted National Monument. As the works would be carried out just 6.7m below the building’s piles, additional protection measures were implemented before tunnelling commenced. Extensive foundation investigations were carried out to ensure that the building’s piles were not within the tunnel alignment, while protective structures were installed to reinforce and stabilise the former Tanjong Pagar Railway Station’s interior and exterior elements. In addition, over 600 monitoring instruments were installed and watched around the clock to detect any movements of the building during the tunnelling works.

Another challenge was the tunnels between Cantonment and Keppel stations which run under the existing Keppel Viaduct. New micro piles were installed to underpin the viaduct structure, replacing three bored piles which had to be cut away to accommodate the new rail tunnels. To ensure structural integrity and safety of road users, close to 100 instruments were installed to monitor the road viaduct during the underpinning and tunnelling works.

The completed Circle Line will comprise 33 stations over 40km, including 12 interchange stations with other MRT lines, providing better connectivity and greater time savings for commuters. Commuters will enjoy a direct route between areas in the west, such as Pasir Panjang and Kent Ridge, as well as areas such as the Central Business District and Marina Bay, to Paya Lebar and Mountbatten. 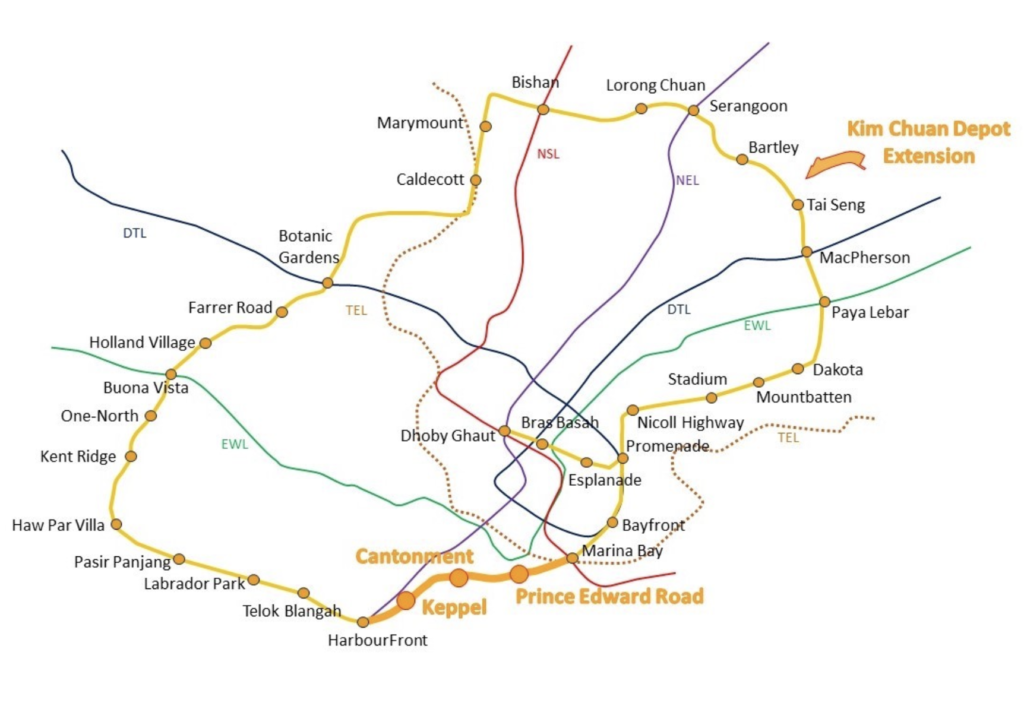