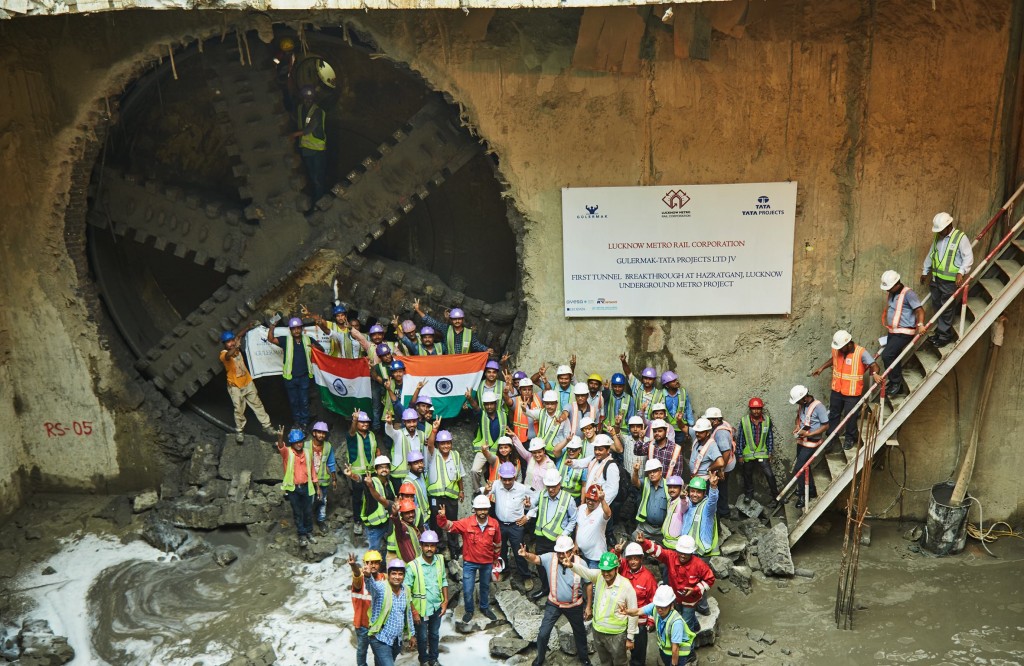 Workers from the Gulermak-TATA Projects JV, representatives from TBM manufacturer, TERRATEC, and officials from the Lucknow Metro Rail Corporation (LMRC) have witnessed the successful completion of Lucknow Metro’s first TBM-driven tunnels on Phase 1 A, part of its 22.88km-long (Phase 1 A) Lucknow Metro North-South line in Uttar Pradesh, India.

The first of two 6.52m diameter TERRATEC EPBMs working on the project, the S52 TBM named ‘Gomti’, was launched from Sachivalaya Station’s Bapu Bhawan Shaft in January. It took Gomti just four months to complete the first down-line tunnel on the line’s 3.44km LKCC-06 underground section, arriving at Hazratganj Station in late May (see map below). Following a 2.5-month wait for the official ceremony, the TBM broke through the station wall on August 07, followed a day later by its sister machine, the S53 TBM named ‘Ganga’, on the up-line tunnel.

The EPB machines feature a classic soil configuration and are equipped with a spoke-style cutterhead with a 57 percent opening ratio. TERRATEC has designed the cutterheads with cutting tools that are interchangeable with 17’’ roller disc cutters, allowing the TBMs to bore through station D-walls and cope with the presence of any unexpected obstacles in the ground.

The TBMs mined through geology consisting of stiff to hard clayey silt and medium to dense silty sand, passing beneath historic buildings in the Capital Plaza of Hazratganj (heritage district) without any disturbance to buildings, public utilities or traffic.

Speaking at the ceremony, LMRC’s Managing Director, Mr. Kumar Keshav said: “This unique achievement was only possible due to the hard work and commitment of the Lucknow Metro project team. The tunnelling in this stretch posed an enormous technical challenge as the route passes beneath highly congested areas at a depth of 12 to 15 meters below ground. With this breakthrough, LMRC has achieved one of the biggest milestones in form of completion of first TBM drive in the construction of underground metro in the state of Uttar Pradesh.”

TATA Projects’ Managing Director Mr. Vinayak Deshpande added,”Due to many heritage structures, the stretch was highly challenging. With excellent guidance from the LMRC team, state-of-the-art TBMs, and a dedicated, passionate, project team, the daunting task was completed in a world-class manner with outstanding quality and before-time completion. We all at TATA projects feel very proud of this accomplishment.” 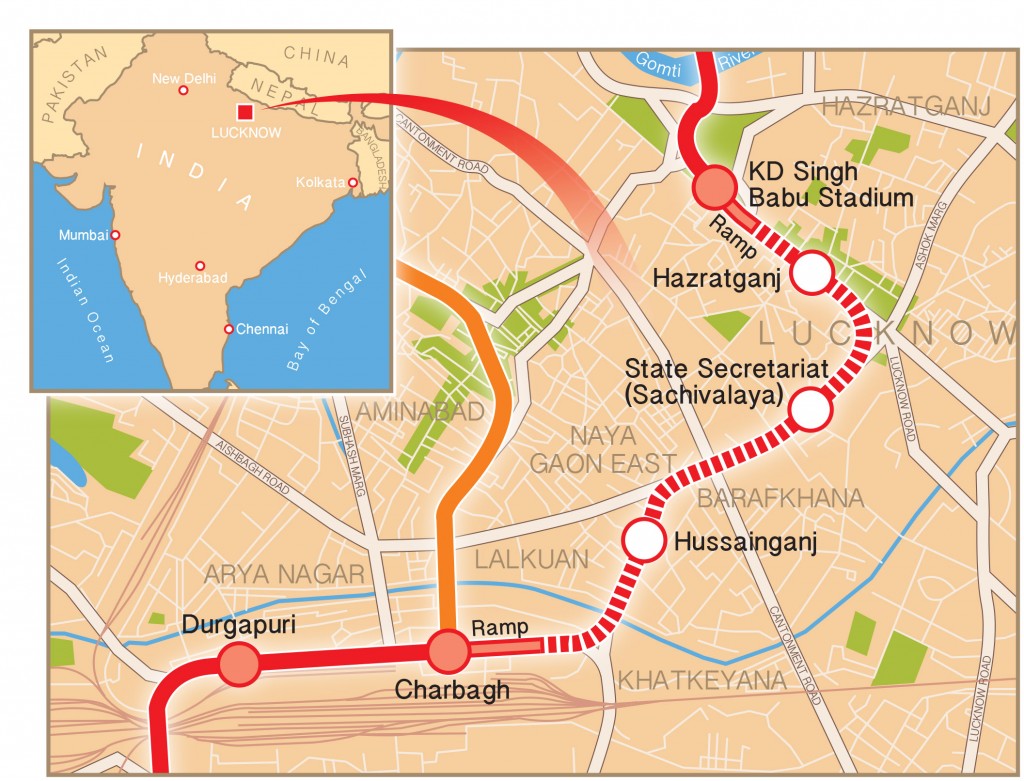 With tunnelling work completed between Sachivalaya & Hazratganj stations, there are now four tunnel drives (and breakthroughs) remaining. The TBMs are currently being reassembled at the Sachivalaya (State Secretariat) Station’s western-end to build twin 613m tunnels towards the Hussainganj Station. From there, they will continue on a further 419m – crossing underneath the Haide Nalah (canal) – to a cut and cover ramp near Charbagh station.

Lucknow is the capital of Uttar Pradesh, the most populated state in India. The city’s rapid growth combined with substantial traffic congestion has prompted the need for a modern public transportation system. Aiming to bring world-class infrastructure to the city, Phase 1 of the two-line Lucknow Metro system is being built at a cost of 6,928 crore (US$1 billion). Phase 2 of the system is due to commence in 2018.