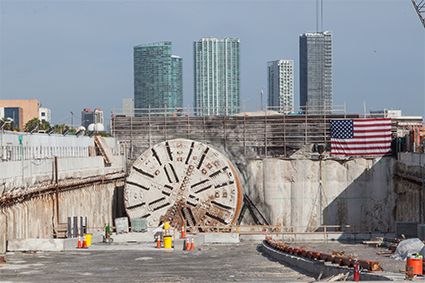 The Florida Department of Transportation and the multinational company building the $1 billion Port of Miami Tunnel have reached a settlement in their dispute over how much the state must pay the firm for unanticipated work on the project, reported the Miami Herald this week.

Under the settlement, FDOT will pay Miami Access Tunnel (MAT) $58.5 million for extra work the company carried out to reinforce the porous limestone subsoil with grout so the tunnel-boring operation would be more stable.

The amount is less than MAT had sought: $67.5 million. The money will come from the project’s contingency reserve fund.

The settlement closes a chapter on an issue that marred the early stages of the project in July 2011. Details of the settlement were contained in a lengthy Jan. 14 memo from FDOT Miami District 6 secretary Gus Pego to Miami-Dade Mayor Carlos Gimenez.

As workers prepared to start boring the tunnel from the MacArthur Causeway to the port, MAT asked FDOT and its partners — Miami-Dade County and the city of Miami — to provide additional money from a contingency fund to cover expenses linked to the extra grouting.

On July 19, 2011, 13 days after MAT requested the money, FDOT rejected the request on the ground that its assessment of subsoil conditions was incorrect.

MAT insisted that geological conditions that its experts found in the bay were different from what FDOT had previously found.

“A preliminary review of the notices by FDOT experts indicates that a changed geological condition does not exist and therefore the concessionaire is not entitled to accessing the reserve [fund],” FDOT said on July 19, 2011.

Company executives took the matter to a mediation panel set up under the project’s agreement. MAT insisted that the limestone its experts found under Biscayne Bay was extremely porous, and that the many gaps in the rock needed to be filled with grout. They also said this meant the $45 million tunnel-boring machine had to be modified. MAT also requested an additional $27 million to cover costs of modifying the tunnel-boring machine, a request FDOT rejected as well.

The Technical Disputes Resolution Board ruled in favor of MAT on the grouting issue and in favor of FDOT on costs to modify the tunnel-boring machine.

The board ruled that the modifications to the tunnel-boring machine were not “compensable” but that the grouting costs were because they were “necessary.”

After the ruling, MAT and FDOT negotiated the settlement down to $58.5 million. At one point, Pego’s memo said, MAT indicated that the amount could go as high as $149 million, and that the project could sustain a three-month delay.

Under the settlement, Pego wrote, no delays are foreseen.

Pego assured Gimenez that the dispute and settlement did not delay the work. “The project schedule remains on track for opening to traffic in May 2014,” Pego said.