Written by Tris Thomas on 29/01/2021 in News
Tagged: Straits of Mackinac Tunnel

The Michigan Department of Environment, Great Lakes, and Energy (EGLE) has announced that it has approved Enbridge Energy’s application for certain permits required to build a 6.4km long (4 mile), 3.3m (10 ft) diameter utility tunnel under the Straits of Mackinac.

If constructed, the $500M tunnel would house a proposed replacement for the 68-year-old Line 5 dual petroleum products pipelines currently lying on lakebed. EGLE’s review of the permit applications concluded that the proposed construction of a tunnel beneath the lakebed can be done in compliance with the state environmental laws that EGLE administers.

EGLE acknowledged public concerns about the existing oil pipeline and affirmed the Michigan Department of Natural Resources’ conclusion that the current pipeline violates the Public Trust Doctrine and poses an unacceptable risk to the Great Lakes.

“EGLE is obligated to review permit applications with the goal of protecting the environment and public health, but within the confines of Michigan law,” said Teresa Seidel, director of EGLE’s Water Resources Division. “During our review of this proposed project, our top priority has been protecting the Straits of Mackinac and the surrounding wetlands, aquatic life, and other natural and cultural resources from adverse environmental impacts.”

EGLE’s review determined that the proposed project would result in minimal impact to wetlands, estimating wetlands affected to be 0.13 acres – an area roughly one-tenth the size of a football field. Enbridge will be required to protect 1.3 acres of existing Great Lakes coastal wetlands and purchase wetlands credits from a state wetlands mitigation bank to address this impact.

Prior to making its permitting decision, EGLE held four public information sessions, four public hearings and four tribal consultations. EGLE’s decision making also included input from the State Historic Preservation Office and a report from an independent civil engineering firm specializing in complex tunneling projects. EGLE also reviewed more than 2,600 comments from the public on the permit applications and devoted more than 2,000 staff-hours to its consideration.

“Although this proposed tunnel project has illuminated numerous related policy issues, the basis for our decision is required to be limited to compliance with the relevant environmental statutes created by our legislature,” said EGLE director Liesl Clark. “Our review showed construction of the proposed tunnel could comply with state environmental laws. We have issued permits designed to ensure that if a tunnel is constructed, it will be in strict compliance with relevant statutes and adhere to stringent protections against impacts to the Great Lakes.”

To keep the public informed, EGLE has partnered with the Michigan Public Service Commission (MPSC) and the Michigan Department of Transportation’s (MDOT) Mackinac Straits Corridor Authority on the state’s Line 5 in Michigan website. Information on this project, permit documents and other supporting materials are available there. 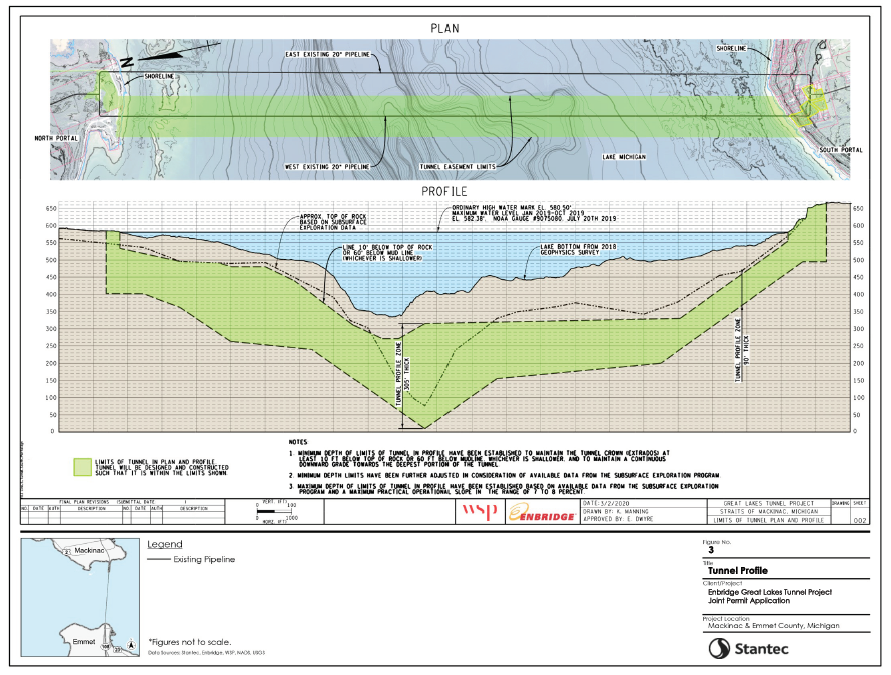