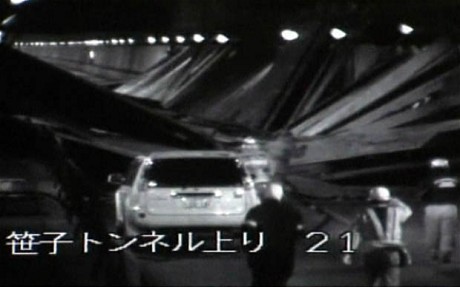 At a press briefing on Monday, the Executive Officer of the Operator of Japan’s Sasago Tunnel – which experienced a catastrophic collapse of its ventilation ‘false’ ceiling over a length of 110m on Sunday, killing nine motorists – said that it appeared some ‘anchor bolts’ used to secure the concrete slabs to the tunnel roof were missing.

‘”There were parts of concrete where bolts had fallen off,” Ryoichi Yoshizawa confirmed, according to a spokesman for Central Japan Expressway Company or NEXCO-Central. Yoshizawa added, “The aging of the bolts or the concrete slabs could be a potential cause.”

It has also emerged in Japanese Media reports that regular visual checks had been performed on the tunnel, but that there had been no actual physical testing, possibly since the tunnel opened in 1977. 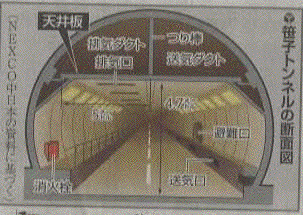 The Sasago Tunnel is twin bore, the west-bound tunnel to Tokyo being 4.7km and the east-bound bore heading to Kofu, 4.3km long. The incident occurred 1.7km from the exit portal of the east-bound tunnel. According to a preliminary engineering report, up to 300 of the 1200kg heavy ventilation duct ceiling pre-cast concrete panels, each 80mm thick, collapsed onto the carriageway, completely crushing three vehicles and starting two fires. An official at Japan’s Fire and Disaster Management Agency, said highway operators had carried out further work to support the remaining ceiling panels.

Following the incident the Ministry of Land, Infrastructure, Transport and Tourism has started emergency inspections of 49 tunnels in Japan that have the same ceiling design, whilst Japanese Police have begun investigating the tunnel’s government owned operator, Central Nippon Expressway (EXCO) to establish whether the company had been neglectful of safety regulations and maintenance.