The Société de transport de Montréal (STM), project manager for the City’s $6.4bn Blue Line Metro extension, has launched a pre-qualification notice for the construction of the tunnel that will extend the Blue Line via 6km of tunnel and five stations. 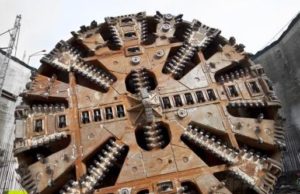 The move will be followed by an official call for tenders and is being promoted as a method of garnering interest from companies with previous TBM experience, as STM says it has no previous experience using the technology on its projects.
“This will be the first use of a TBM in the long history of the STM,” says Marie-Claude Léonard, Interim CEO of the STM. “It will allow us to speed up the excavation process and will help us to build high-quality infrastructure as we extend the Blue line of the Montréal métro.”

“The publication of the pre-qualification notice is great news for the STM and represents another step toward the execution phase of this structuring project for the STM, its clients and citizens of the East.” added Éric- Alan Caldwell, Chair of the STM Board of Directors.

Excavation is said to be slated for a 2023 start. At a press conference last month city officials announced that the Blue Line extension was planned to be open in 2029, with Quebec cabinet minister Chantal Rouleau saying, “the cash is on the table, because the plan is real”.