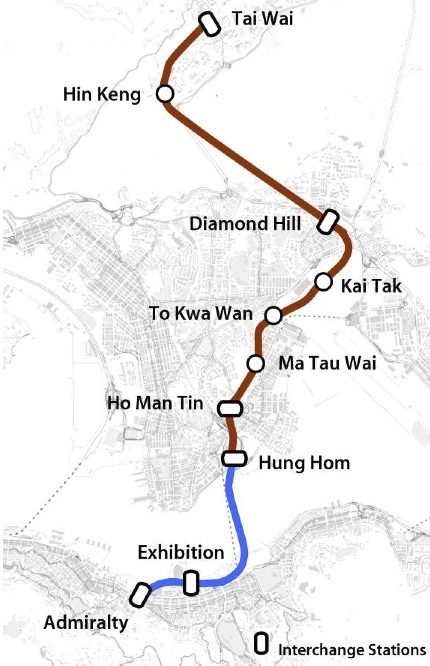 The MTR Corporation has welcomed the authorization of the US$4.6bn,17km Shatin to Central Link (SCL) by the Chief Executive-in-Council under the Railways Ordinance. The line, given the official go ahead at the end of last month, will form part of a link between Hong Kong Island and Mainland China. Spilt into two phases, Phase 1 runs for 11km, 10.6km of which is underground between Tai Wai and Hung Hom Stations, whilst the 6km long entirely underground Phase 2 continues the line from Hung Hom to Admiralty with a 2km crossing of Victoria Harbour.

“The SCL will play a critically vital part in connecting all districts of Hong Kong with an integrated rail network,” said Mr Jay Walder, Chief Executive Officer of MTR Corporation.

“It will provide much needed railway service to the East Kowloon District including Ho Man Tin, To Kwa Wan, Ma Tau Wai and Kai Tak, and will go a long way to facilitating these areas to rejuvenate and prosper.”

Subject to the funding approval for the project, the construction is expected to start in mid-2012. The section between Tai Wai and Hung Hom is expected to be completed first in 2018.  The Hung Hom to Admiralty Section would be completed in 2020 as this section needs to interface with other infrastructure projects, including the Wan Chai Development Phase II and Central-Wan Chai Bypass.  It is estimated that the SCL will create 16,000 jobs.