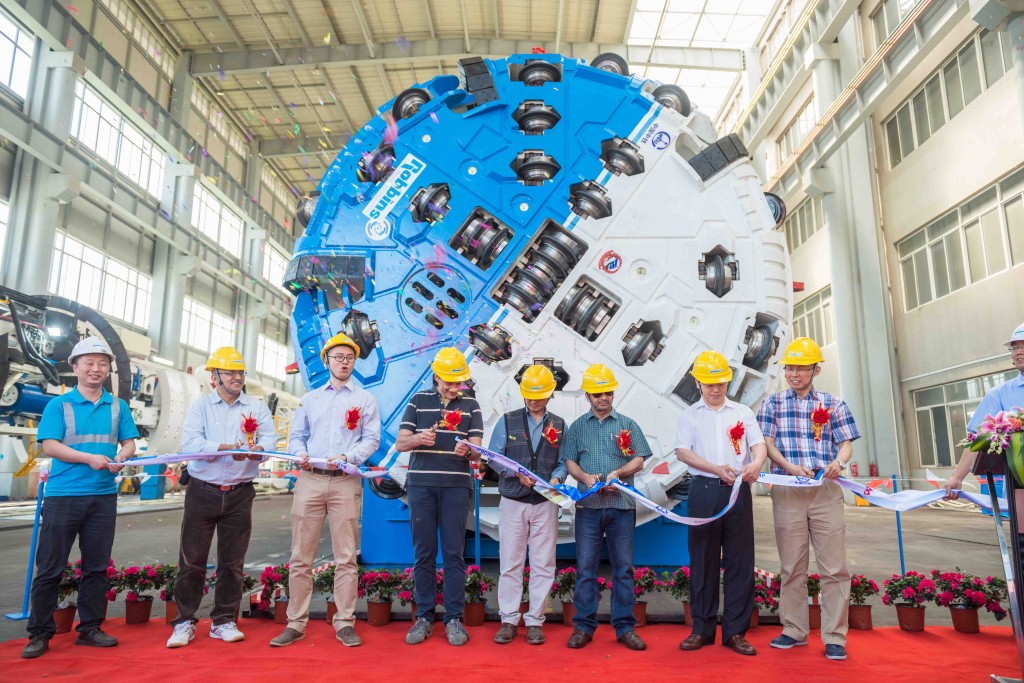 Nepal will welcome its first ever TBM this summer, a 5.06m diameter Double Shield machine for the Bheri Babai Diversion Multipurpose Project (BBDMP).  The Robbins TBM underwent its Factory Acceptance Testing in July 2017 and is currently being shipped to the jobsite in the Siwalik Range – part of the Southern Himalayan Mountains – where it will be prepared for launch in November 2017.

Due to the challenges in the young geology of the Himalayas, Difficult Ground Solutions (DGS) have been incorporated into the machine’s design. A stepped shield has been designed to move through squeezing ground. Robbins Project Engineer Missy Isaman talked about the DGS features incorporated into the TBM: “There is a probe drill in the rear that probes through the gripper shield in 14 places.  We added ports in the forward shield for drilling too. There are eight ports around the circumference for hand drilling.  There are also six ports in the top 100 degrees of the shield for forepoling.” She further noted that no equipment was ordered for either of the forward shield drilling options, but it’s easier to add the ports to the shield now, in case more comprehensive drilling is needed later in the bore. Other machine modifications included 35mm (70mm on the diameter) of possible overcut for gage cutters, and additional ports in the forward shield for dewatering.

Muck removal will be achieved by muck cars. Robbins will provide Field Service to support the machine erection, testing, commissioning and boring of the first 500m. The tunnel will be lined with hexagonal precast concrete segments.

The project owner, the Government of Nepal’s Ministry of Irrigation (MOI), has chosen a TBM over the traditional method of Drill &Blast due to the faster mobilization and rate of advance offered by mechanized mining. “The reason a TBM was chosen for this project was because using D&B method could have taken at least 12 years for project completion. This was due to there only being one excavation heading with no possibility of launching multiple operations using adit tunnels,” said Robbins General Manager for Nepal, Prajwal Man Shrestha. More generally, Mr. Shrestha saw the project as a way to prove that TBMs can indeed take on complex Himalayan rock. “Since the Himalayan range has a young geology and not much has been surveyed yet, the use of newer technology is looked upon with slight apprehension. The first few TBM projects and additional surveys will show how suitable TBM technology will be for the Himalayan Range.”

The BBDMP is one of Nepal’s 11 National Pride Projects–prioritized plans sanctioned by the Government of Nepal to further develop the mainly rural country. This project will irrigate 60,000 hectares (almost 15,000 acres) of land in the southern region of Nepal, benefitting an estimated 30,000 households. It will divert 40 cubic meters of water per second from Bheri River to Babai River under a head of 150m using a 15m tall dam, providing year-round irrigation in the surrounding Banke and Bardia districts. The water will also be used for hydroelectricity, with a generating capacity of 48MW benefiting the country with NPR2bn (US$20M) annually.

The success of the BBDMP is paramount for the country as well as the TBM industry. It is expected to help aide the food crisis in the mid-western region of Nepal by increasing agricultural yields and invigorating socio-economic development in the region.