New Jersey Governor Chris Christie has officially canceled the largest public works project in the United States, reiterating the state cannot afford the potential cost overruns of a commuter rail tunnel under the Hudson River to New York. It is the second time the governor has killed the tunnel this month.

Christie made the announcement at a press conference earlier today, Wednesday 27 October, following a two week stay of execution at the request of US Transportation Secretary Ray LaHood.

“In the end my decision has not changed,” Christie told reporters in Trenton today. “I cannot place upon the citizens of New Jersey an open letter of credit. What proponents are asking me to do is hand over a blank check. I simply will not do that.” He called the decision final and said there “is no opportunity for reconsideration.”

The decision followed an “honest and frank” discussion with LaHood, he said. LaHood has told Christie the state will now loose its $3 billion in federal money and that these funds will likely go to other projects across the country.

On October 7th, New Jersey Governor Chris Christie announced that he was going to kill the multi-billion dollar Access to the Region’s Core (ARC) Mass Transit Tunnel saying the project’s $8.7 billion price tag had the potential to reach $14 billion. However, in a further twist to the saga, the following day the governor announced that several salvage ideas for the Hudson tunnel had emerged from talks with US Transportation Secretary Ray LaHood.

Following LaHood’s visit, Christie agreed to have state transportation officials spend two weeks studying “several options to potentially salvage a trans-Hudson tunnel project.” He said the suggestions came from LaHood and his own belief that the project should be scrapped remains unchanged. “The fact that the ARC project is not financially viable and is expected to dramatically exceed its current budget remains unchanged,” said Christie at the time.

“I have made a pledge to the people of New Jersey that on my watch I will not allow taxpayers to fund projects that run over budget with no clear way of how these costs will be paid for,” said the governor at the October 7th press conference. “Considering the unprecedented fiscal and economic climate our State is facing, it is completely unthinkable to borrow more money and leave taxpayers responsible for billions in cost overruns.

State Senator Frank Lautenberg, who has spent the last several weeks organizing rallies and events to win public support for the project, said yesterday (Tuesday, October 26) that federal officials attempted to find other solutions. US Transportation Deputy Secretary John Porcari brought Christie four proposals for the tunnel on Sunday, none of which required the state to put up more than its budgeted $2.7 billion share immediately. Each plan had ways to deal with or minimizing overruns and one eliminated the state’s risk entirely through a proposed public-private partnership.

Christie called a 30-day temporary halt in September on new tunnel construction, prior to the scheduled award of one of the project’s major tunnel construction contracts. At the same time, the governor was confronted with the state’s nearly bankrupt Transportation Trust Fund, which pays for road and bridge repairs and transit services. Christie has vowed not to increase the state’s gas tax – the third lowest in the country – to pay for the fund, saying that drivers already had to contend with New Jersey Turnpike toll hikes. The speculation is that Christie will now shift the state’s share of the tunnel into this trust fund.

The new 9-mile (14.5km) long twin-track line, which included a 3.4-mile (5.47km) long, 24ft 6in (7.46m) diameter tunnel under the Hudson River, was meant to double the commuter rail capacity between the two states and create a new, state-of-the-art, 245ft long x 96ft wide station cavern in Midtown Manhattan. Work began last year and was projected to create 6,000 construction jobs a year for a decade. New Jersey’s share of the budgeted cost was $2.7 billion, while the Federal Transit Administration and the Port Authority of New York & New Jersey each put up $3 billion. 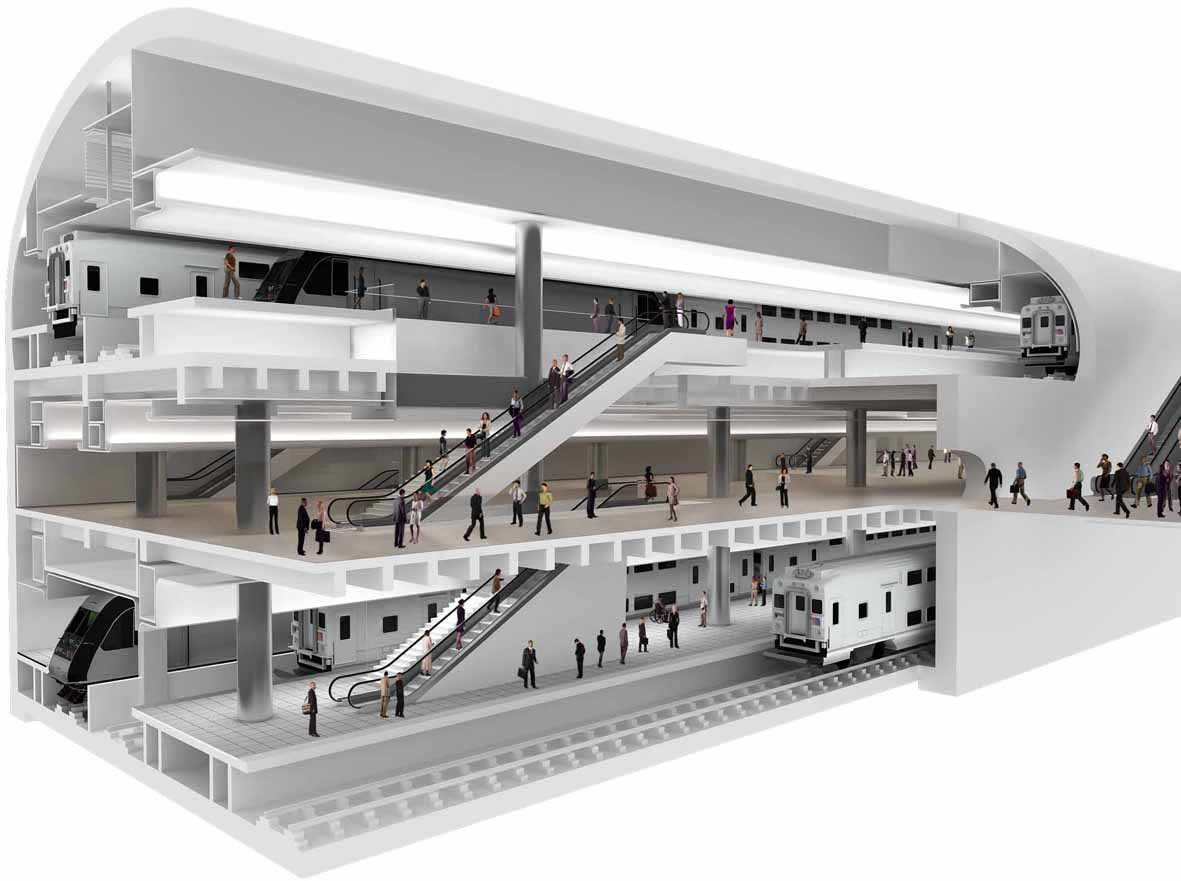 the project, which was scheduled for completion in 2018, now means the loss of $600 million of taxpayers’ money that has already been spent on planning, design and construction. New Jersey will also have to repay the federal government about $300 million plus interest and penalties for its share. New Jersey’s US Senator Frank Lautenberg called Christie’s decision “one of the biggest public-policy blunders in New Jersey history.”

Thomas Wright, the head of the Regional Plan Association, said the cancellation “casts a dark shadow over the economic future of New Jersey.” He also said the $5 billion estimate for overruns that Christie is now citing is overstated, with the actual number being closer to $1 billion. “This is a potential overrun that’s many years down the road. It should not have been used as the excuse to kill this project,” he said.

Among the construction contracts affected by the decision are the project’s three major tunnel packages. A joint venture of Barnard and Judlau Contracting was the low bidder for the Manhattan tunnels contract in early December 2009 at a price of $583 million, which included 5,700ft (1.73km) of twin bore hard rock tunnels and associated structures. The Palisades tunnels contract, also bid at the end of last year, went to a JV of Schiavone/Shea/Skanska at a price of $259 million and included 5,200ft (1.58km) of twin hard rock tunnels that were due to be excavated using a 27.5ft (8.38m) diameter Robbins retractable Main Beam TBM.