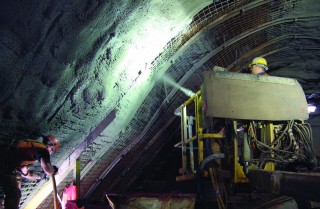 June 2010 has seen the world’s largest hard rock TBM complete more than two-thirds of its headrace tunnel beneath Niagara Falls. The 14.4m diameter Robbins Main Beam TBM has excavated 6.8km of the 10.4km long conduit for Canada’s Niagara Tunnel Project in Queenston, Ontario.Geologic conditions have largely determined the project’s advance, from periodic stoppages to a world record month of 467m in July 2009. The advance rate is claimed to be a landmark achievement for TBMs in the 14 – 15m diameter range.

“We also raised the tunnel alignment by 45m to bring the tunnel out of the Queenston shale and into more competent rock, in order to reduce over-break,” said Ernst Gschnitzer, Project Manager for contractor Strabag AG. Much of the tunnel face is now in whirlpool sandstone and conditions are improving.

“We are happy with the current rock conditions and ground support system, as we haven’t been short of challenges in the past.”

“There were excellent ground conditions in the month of July 2009 with no over-break, this is what allowed for the fast advance rate,” said Gschnitzer.

Conditions in the tunnel have been highly variable, with significant over-break occurring within the first 200m of tunnel through Queenston shale. Crews scaled down the loose rock and adopted a newly redesigned ground support program consisting of 9m long grouted spiles, 4m long rock bolts, wire mesh, steel straps, and a layer of shotcrete.

Four different processes are currently being done from the single tunnel opening.   Crews are excavating the tunnel, performing repairs in sections of overbreak, laying invert concrete, and conducting arch lining for the upper two-thirds of the tunnel.

The finished 12.8m diameter tunnel will be fully lined with 600mm thick continuously poured concrete and a polyolefin waterproof membrane to prevent leakage. The tunnel is being lined behind the TBM using separate invert and arch lining systems as well as a membrane laying machine. By May 2010, invert concreting had reached 4.8km into the tunnel, while arch lining started up recently.

The provincially owned company, the Ontario Power Generation, initiated the Niagara Tunnel Project in June 2004. The tunnel is the third headrace under Niagara Falls, and will add up to 500m3/sec for hydroelectric generation by 2013, enough power to service 130,000 Canadian customers.