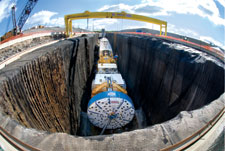 Local news reports are coming in of a fire at 5.30am (US time) on Tuesday 27th, some 5.3km into Canada’s 10.4km long Niagara River Diversion Tunnel Project. Four tunnellers working for Austrian contractor Strabag were taken to hospital, purely as a precaution, after some 30 workers were forced to take refuge until 10am (US time) inside two emergency containers installed on the 14.4m diameter Robbins Main Beam TBM, after a diesel compressor caught fire.The actual cause of the fire on the compressor is as yet unknown, but what is certain is that tunnel workers immediately reacted to the fire and successfully carried out emergency procedures practiced every six months purely for such instances as yesterday’s fire.

“The guys did all the right things. It worked like it did on previous training exercises,” Gschnitzer said. Work was expected to resume at 3pm.

The owner for the US$600M project is Ontario Power Generation (OPG) with consultants Hatch Mott MacDonald and Hatch Acres acting as Owner’s Representatives.

Using the world’s largest hard rock TBM, boring began in September 2006 through the alignment’s Queenston shale with some limestone, dolostone, sandstone and mudstone up to 200MPa. Currently the TBM has reached the 6,745m mark, with the invert concrete carrier following behind at 4,775m.