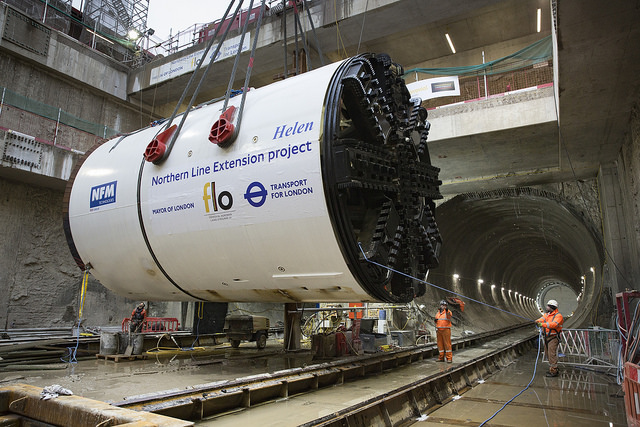 A major milestone in the construction of London Underground’s Northern Line Extension has been reached with the lowering of the two 6m diameter NFM TBMs 20m below ground in Battersea, ahead of tunnelling starting in March.

The operation required a huge 750-tonne crane to lift the two TBMs, Helen and Amy, in the shadow of London’s iconic Battersea Power Station.

The Ferrovial Agroman/Laing O’Rourke (FLO) joint venture will use the two machines to create twin 3.2km, 5.2m i.d. tunnels extending the Charing Cross branch of the Northern line from Kennington to Battersea Power Station, via Nine Elms Station. Tunnelling will take six months to complete. The extension, targeted for completion in 2020, is the first major Tube line extension since the Jubilee line in the late 1990s.

Both machines will now be fully assembled within two 77m long launch tunnels, before starting their journeys towards Kennington next month. When fully assembled, Helen and Amy will each be 100m in length.

According to tunnelling tradition, the machines cannot start work until given a name and, following a vote by local school children, were named in honour of the first British astronaut, Helen Sharman, and British aviation pioneer, Amy Johnson, who was the first female pilot to fly solo from Britain to Australia.

After both TBMs and their gantries are constructed, a conveyor system will be built to take the spoil from the tunnels up to barges on the River Thames. More than 300,000 tonnes of earth will be excavated by Helen and Amy in this way before the spoil is taken to Goshems Farm in East Tilbury, Essex by boat where it will be used to create arable farmland.