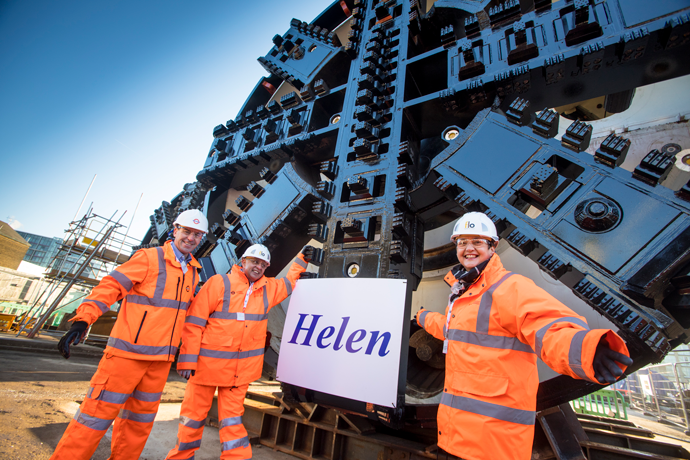 The two 6m diameter NFM TBMs, that will be used to build the major part of the tunnels for London Underground’s new Northern Line Extension under South London, were unveiled by the Ferrovial Agroman/Laing O’Rourke (FLO) joint venture at a ceremony in Battersea on 20th January.London Deputy Mayor for Transport, Val Shawcross visited the Battersea Station NLE site, and ceremonially announced both TBMs names, ‘Helen’ and ‘Amy’.

Having the project ready to launch main tunnelling represents a major milestone for the NLE.

“With our two TBMs now ceremonially named, in the tradition adopted across the tunnelling world, we will follow their progress in a ‘personal’ way. Helen will bore the 2.6kms southbound running tunnel to Kennington Park; Amy will bore the 2.4kms northbound tunnel to Kennington Green. We will ensure that these two majestic ‘ladies’ are thoroughly cared for on their very important journeys. We wish Helen and Amy bon voyage!”

Mark Wild, Managing Director of London Underground, said: “This is a significant moment in the history of London Underground as we prepare to start tunnelling to create the first extension to our historic Tube network for nearly two decades. The Northern Line Extension will bring Battersea and surrounding areas to within 15 minutes of the West End and City. It will also help us to support jobs, homes and growth in this part of south London, help keep pace with the Capital’s rapidly rising population, and is creating jobs through the supply chain across the UK.”