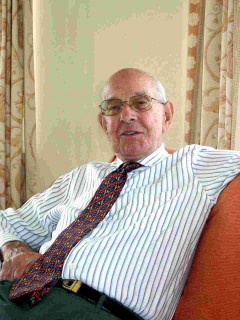 It is with sadness that we must report the death of Donald Rees OBE, who recently died in the Algarve at the age of 91. He was a much-acclaimed engineer and businessman and pioneer of the No-Dig (trenchless) industry. Ironically, many of his innovative engineering achievements remained hidden. Not so his devotion to his family, which throughout his career was always paramount.

He was born in South Wales, the youngest of three children. His father was an ambitious Cockney with a great sense of fun. His Scottish mother was warm and easy-going, a balancing force. Donald inherited all these characteristics.

Growing up in Cheltenham and London, he exuded enthusiasm despite the aftermath effects of the First World War, the hardships of the Great Depression and the approach of World War II. He revelled in the advent of domestic electricity, wind-up phones, Al Jolson on the wireless and dancing the night away to big bands in the Hammersmith Palais.

A mischievous student at Cheltenham College, he had hopes of studying engineering at Cambridge University. At his father’s suggestion, he opted instead for the ‘University of Life’, a decision he never regretted.

During World War II, he commanded a unit of the Royal Engineers in India, Burma and Malaya. On returning home, he found that his father’s road surfacing company had been decimated by wartime exhaustion and austerity. With typical forward-looking boldness, he took on the challenge of reinvigorating and modernising the business.

On first encountering Mary Smith, an ‘utterly gorgeous’ nurse working in the General Hospital in Brighton, “I could not resist approaching her and inviting her to have tea with me,” he recorded in his diaries. “She said she would be delighted.” They married in 1947 and moved to their first ‘dream house’ in Horley, Surrey.

Donald and Mary had six sons, and they needed increasingly large properties to accommodate the expanding family. The main family home for most of their time in England stood next to the 18th tee of one of the world’s most celebrated golf venues, the West Course at Wentworth.

Meanwhile, Donald was greatly expanding his father’s business by undertaking public works underground as well as at street level. Under his guidance, the company developed innovative methods of restoring old, and in some cases bomb-damaged, sewage systems. The traditional repair techniques involved roads being dug up, causing delay and disruption, but Donald and his colleagues developed ‘No-Dig’ tunnelling techniques based on the Rees Mini-Tunnel; they also pioneered the use of close circuit television cameras in subterranean investigations. As a leader in its field, the company’s services and products were much sought after not only across the UK and the Channel Islands, but as far afield as the United States, South America and Southeast Asia.

Commenting on the news of Donald’s passing, Dec Downey, current chairman of the International Society for Trenchless Technology (ISTT) said: “Donald opened the first No Dig Conference in London 1985 posing the question ‘Is there a NoDig Future?’ Along with other founders of ISTT he worked to establish that future; he helped organise the 1987 Conference and served as an ISTT Guarantor for almost 20 years, submitting thought-provoking contributions long after retiring to Portugal. His contributions to pipeline investigation and pipeline construction were also significant.  He is remembered by pipe jacking and tunnelling pioneer James Thomson who shared the platform with him in 1985 as a tough competitor and a visionary innovator; they shared knowledge of many successes and failures and became firm friends in the process, exemplars of the ethos of UKSTT and ISTT.”

Looking Donald’s contribution to the inception of the ‘trenchless’ industry, Ted Flaxman, founding chairman of ISTT, said: “I first met Donald Rees many years ago in connection with a job in King’s Lynn where some particularly challenging deep construction near the ancient Custom House involved the use of his firm’s Mini-Tunnel, an innovative technique for small size tunnelling. We were delighted when he agreed in 1980 to join the small ‘Working Party on Trenchless Construction’ which was being formed by the Institution of Public Health Engineers. His contributions to the deliberations of that body were lively and constructive and occasionally hilarious. After the Working Party had reported to the Institution it was decided to initiate in 1985 ‘An International Conference and Exhibition on Trenchless Construction for Utilities’ in London.  At several meetings we wrestled with the problem of coining a shorter, snappier, title for the event and it was Donald Rees and James Wishart together who eventually came up with the ‘No-Dig’ title which has continued in use by the industry ever since.”

Donald made a major contribution to that first, very successful, No-Dig Conference in 1985 and he later took an important part in the follow-up which resulted in the formation of ISTT in 1986.

Ted went on to say: “Donald’s irrepressible character was well and truly illustrated two years ago when he reached the grand old age of 90. Joan (Mrs Flaxman) and I had never actually visited his home in Portugal, despite repeated invitations, but he sent us a very professional DVD recording the THREE happy parties which took place on separate days to celebrate the occasion. On the actual date of his birthday we sent him an email of hearty congratulations. The reply we received showed that, despite the advancing years and the loss of Mary, he had not lost any of his zest for life. Donald was a splendid character who will be long remembered for his innovative thinking and warm friendliness.”

As a liveryman and later Master of the Worshipful Company of Paviors, a Fellow of the Institution of Public Health Engineers and a Companion of the Institution of Civil Engineers, Donald was adept at cultivating business contacts and marketing. In addition to an impressive array of industrial awards, including Design Council Awards for the Mini-Tunnel and CCTV Camera System, and the Queen´s Award for Industry, he was honoured with an OBE for his services to British exports.

Attracted by its mild climate, Donald and Mary built a charming house in the Algarve, near Porches, for their retirement in 1983. They were relatively early members of the expatriate community there, and Donald was a keen participant in the fledgling AFPOP (Association of Foreign Property-Owners of Portugal) and a regular supporter of local Royal British Legion events. After 55 years of marriage, Mary died in Portugal in 2002. She had been Donald’s constant inspiration, and he often told friends: “not a day goes by in which I do not feel her loss sorely.”

After a short period of poor health and with family at his bedside, Donald died at home near Algoz, in the early hours of 18th April 2010, the day before his 63rd wedding anniversary. He will be sorely missed by his six sons and their families, including 11 grandchildren and 3 great grandchildren.