Two 15.6m diameter Herrenknecht TBMs have been ordered to help build North East Link’s 6.5km road tunnels that will fix the missing link in Melbourne’s freeway network, slash travel times by up to 35 minutes, and get 15,000 trucks off local roads. The machines will be among the biggest in the southern hemisphere.

The machines will be driven by the Spark Consortium, which was awarded the $11.1bn contract to deliver the North East Link Tunnels towards the end of 2021. The consortium comprises WeBuild, CPB Contractors, GS Engineering and Construction, China Construction Oceania, Ventia, Capella Capital, John Laing, DIF and Pacific Partnerships.

With the massive machines now on order ready for tunnelling in 2024, it will take around 18 months for the design, manufacturing, testing and transportation of the TBMs, which will arrive in Melbourne via ship. They will then be transported to site in Watsonia, lowered piece by piece into an excavated box, assembled, and launched on their journey south toward Bulleen.

Throughout winter significant work will be underway to get ready for tunnelling. The project has switched on the new Yarra East Main Sewer which has been moved to make way for North East Link, and will set up construction compounds along Greensborough Road and at Winsor Reserve. 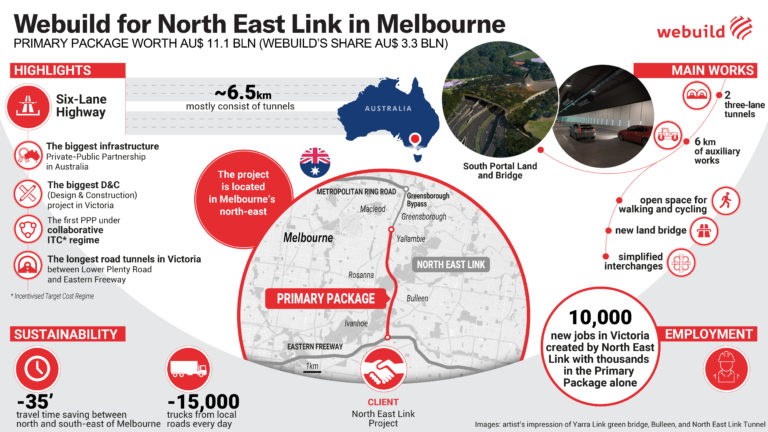