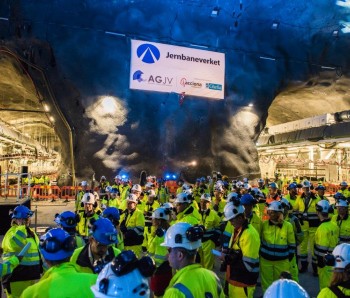 In early September, Norway’s Prime Minister Erna Solberg baptised the Follo Line’s first two TBMs with the names Queen Eufemia and Queen Ellisiv, whilst Minister of Transport and Communication Ketil Solvik-Olsen started up the first of the machines being used on the project.

The event marked the beginning of the excavation of what will be Scandinavia’s longest railway tunnel. In total four 9.96m diameter Herrenknecht hard rock TBMs will be used to excavate 18.5km of 8.75m i.d. segmentally lined tunnel.

The baptism took place inside a large assembly hall one kilometer from the tunnel entrance at Åsland, Oslo. The first two machines will depart from Åsland in Oslo and excavate their way toward Oslo.

The two other TBMs will later begin boring toward the new public transport hub in Ski. They are named after the merchant Anna from Kloppa, and the coach/ferrywoman Magda Flåtestad.

Each of the TBMs will bore 9km of tunnel along the new double-track line between Oslo and Ski.

The ceremony was attended by 90 guests and staff. Representatives from the municipalities where the Follo Line run through were also present, along with the Italian and Spanish ambassadors to Norway, representatives from the Norwegian National Rail Administration and executives the TBM-contractor Acciona Ghella Joint Venture.

“We are very impressed with the work being done at Åsland since the contract was signed with Acciona Ghella in March 2015. Thanks to a magnificent effort by the main contractor and subcontractors, the project is right on track. We are now entering a new phase of this project as the first TBM starts to bore. This is a very important milestone for the project and for the Norwegian National Rail Administration,” said Deputy Director General Gunnar G. Løvås, Jernbaneverket.

“Now is when work really begins. We have been preparing to start TBM-tunnelling for a year and a half now, and I am proud to say we are ahead of schedule. We have established a good working relationship with the Norwegian National Rail Administration and a strong international team which work together with Norwegian managers and suppliers.” emphasised Project Director Fernando Vara from Acciona Ghella Joint Venture.

These TBMs are specially designed and constructed to tunnel through hard Norwegian rock in the Ekeberg Hill. They were manufactured at the Herrenknecht factory, Germany, then transported to Norway in sections and reassembled in the mountain hall at Åsland.

Boring is scheduled to finish at the end of 2018.