The Virginia Department of Transportation (VDOT) has issued Notice to Proceed (NTP) to Hampton Roads Connector Partners (HRCP) to begin building the Hampton Roads Bridge-Tunnel (HRBT) Expansion project. The NTP from VDOT means the builder can start interstate and tunnel work in the 9.9-mile project corridor. Tunnelling will involve the bored construction of twin 8,000 ft, 45 ft diameter drives, creating the second largest tunnel opening for a TBM in North America. 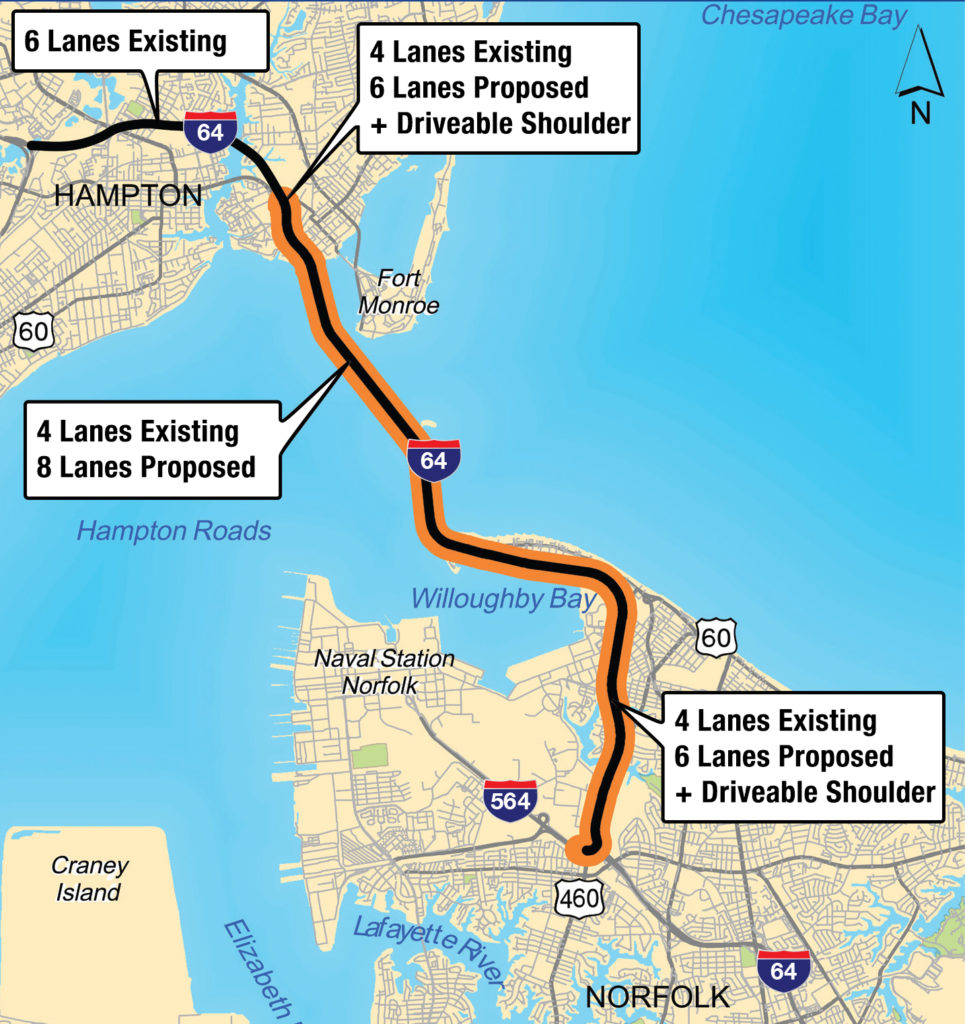 NTP comes just a month after HRCP received all necessary state and federal permits to start work in waterways and along Interstate 64 (I-64) between Hampton and Norfolk. According to HRBT Expansion Project Director Jim Utterback, “Acquiring the permits for a project of this magnitude in 16 months was a remarkable effort. The coordination and collaboration among HRCP, federal and state agencies, and VDOT was a key to the success. Our goal is to continue this collaboration as we issue NTP and move into detailed design and construction of the project.”

Comprehensive and funding agreements for the $3.8bn project, which will add twin two-lane bored tunnels next to the existing 3.5 mile long HRBT and widen I-64, were signed in April 2019. The Hampton Roads Transportation Accountability Commission oversees funding of the project, which is being financed with regional sales and gas tax collections, and includes $200M from the Commonwealth’s SMART SCALE transportation prioritization program, where it ranked first in the following categories: congestion, access to jobs, multimodal access, intermodal access, and travel time reliability.

Until now, HRCP’s work was limited to geotechnical borings and early work on the HRBT South Island to prepare the site for the TBM, which will launch from the island in early 2022, and begin the excavation of two new tunnels.

With the start of construction, motorists can expect to see pile driving activity in the water for the replacement and widening of bridges along the interstate, and North and South Island expansion as early as this fall. Two lanes of travel will be maintained in both directions at all times.

In addition to bringing much-needed congestion relief and providing travel time reliability to the corridor, the expansion project is designed to enhance safety, improve hurricane evacuation routes, and ensure military and maritime readiness.

Most of the construction and tunnelling will occur over a 55-month period between late 2020 and 2025. Motorists should pay attention to new interstate signs and electronic message boards detailing roadwork ahead and be mindful of crews working behind concrete barriers on the interstate.

The Hampton Roads Connector Partners is a joint venture consisting of multiple partners, with Dragados USA serving as lead contractor and HDR and Mott MacDonald as lead designers.