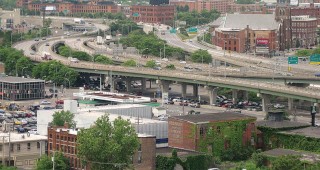 The New York State Department of Transportation (NYSDOT) has revealed three new tunnel options as part of project scoping studies for a comprehensive planned upgrade of the 50-year-old Interstate 81 (I-81) highway viaduct, which runs through downtown Syracuse.

Preliminary concepts for the tunnel alternative were discussed earlier this month during initial meetings of the project’s Community and Economic Development Advisory Working Group, and the Sustainability Advisory Working Group; and were explained in detail to the general public at a meeting held yesterday, April 29.

Following a three-year planning study – prepared in cooperation with the Syracuse Metropolitan Transportation Council (SMTC) and the Federal Highway Administration (FHWA) – NYSDOT is proposing to rehabilitate, reconstruct, or replace the I-81 from Van Buren or Castle Streets to Hiawatha Boulevard.

Two of the tunnel options would go underneath downtown Syracuse on a path similar to the current viaduct. The option explained in the greatest detail would follow Almond Street. That tunnel would begin as I-81 enters the south side of the downtown area near Castle Street and re-emerge on the city’s north side near Butternut Street. It would include improved connections to I-690 heading east and west.

The second downtown tunnel plan would move the excavation over a few blocks to the west following the line of the current Townsend Street. That would allow the current highway to remain standing during construction, but it would also significantly impact the Pioneer Homes housing project and other downtown buildings.

A third tunnel option, called the Eastern Alignment Tunnel Alternative, would begin well south of downtown, near the 481 interchange and cut underneath University Hill, and emerge near Teall Avenue and I-690. The tunnel would then resume and re-emerge on the city’s north side connecting with the I-81 North near Bear Street. This is the most elaborate alternative with a cost estimated close to $4 billion.

NYSDOT will be holding a further meeting on Thursday, May 1, to update the public on the alternatives under consideration. The meeting will take place at the Hosmer Auditorium of the Everson Museum, at 401 Harrison Street, in Syracuse. I-81 Viaduct Project Director, Mark Frechette, will begin presentations at 4pm.

Work on the alternatives will continue throughout the spring and more details will be presented at a second project scoping meeting, scheduled for this summer; one of the first steps in the development of an Environmental Impact Statement (EIS). NYSDOT will seek funding for and approval of the project by federal agencies. FHWA is serving as the federal lead agency for the EIS, and NYSDOT is serving as the state lead agency.

Further details can be found on the project web site: www.i81opportunities.org