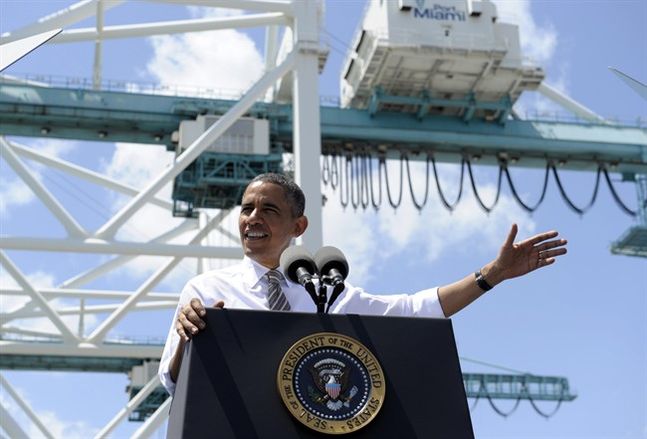 President Barack Obama visited the Port of Miami Tunnel Project, in Florida, on Friday, March 29, to highlight the use of Public-Private partnerships to deliver big-ticket projects such highways, bridges and tunnels, promoting a new plan to rebuild the nation’s roads, bridges and points of commerce — a series of measures that White House officials argue could appeal to business-minded Republicans.

The Port of Miami Tunnel project, which is the result of three years of work by more than 6,000 sub-contractors and vendors, will connect the port to the interstate highway system and will take over 1.5 million trucks out of the downtown area per year. The major infrastructure project, which is being built at an estimated cost of US$1.3billion, includes a ¾-mile (1.1 km) long twin-tube highway tunnel that will connect the MacArthur Causeway on Watson Island to the Port of Miami on Dodge Island.

The tunnel project is a design-build-finance-operate-and-maintain (DBFOM) Public Private Partnership (PPP) between public partners the Florida Department of Transportation (FDOT), Miami-Dade County and the City of Miami, and MAT Concessionaire, which is made up of Meridiam Infrastructure and Bouygues Travaux Publics. Bouygues Civil Works Florida is the Design-Build Contractor. 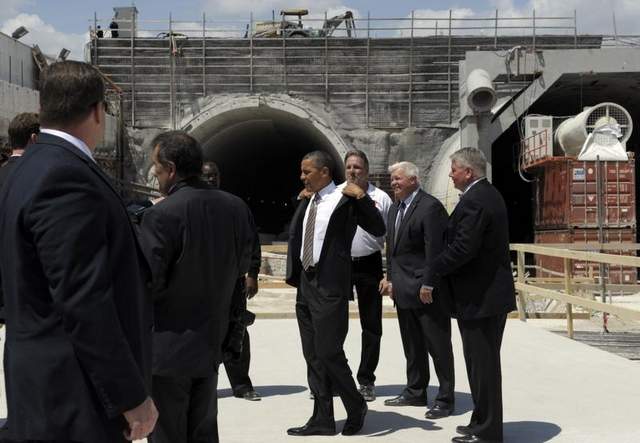 “It is projects like this one,” the US President said in remarks following his tour, “that will help reignite the true engine of our economic growth – a rising, thriving middle class. Projects like this create a lot of other good jobs, too,” President Obama explained. “You ask any CEO where we they rather locate their business and hire new workers. Are you going to set up shop in a country that’s got raggedy roads, runways that are pot-holed, and backed-up supply chains?  Or are you going to seek out high-speed rail, Internet, high-tech schools, new state-of-the-art power grids, new bridges, new tunnels, new ports that help you ship products made in America to the rest of the world as fast as possible?”

The US President laid out a plan that will create jobs while upgrading what businesses need most – modern ports; modern pipelines and tunnels; and modern schools. Called the ‘Partnership to Rebuild America’, this partnership with the private sector has three main components: creating an independent fund which would leverage private and public capital for infrastructure projects that show the greatest merit; fund more projects, at less cost, by establishing new America Fast Forward bonds which will give mayors and governors more flexibility and power to attract private investment for public projects; and strengthening a loan program (the Transportation Infrastructure Finance and Innovation Act  or TIFIA) that will give cities and counties better access to funds for infrastructure improvements.

“At more than 500 employees, of which nearly 90% are local hires, Bouygues is proud of the great progress we’ve made in this very challenging project,” Bouygues Project Executive, Louis Brais, told NATJ. “President Obama used his visit to affirm his belief in and commitment to Public Private Partnerships, using ours as a national model, and we look forward to partnering with the public for other great projects.”

Bouygues’ historic Port of Miami Tunnel Project is currently at 69% completion. The first of the twin tubes (eastbound tunnel) was completed on July 31, 2012. With a final completion date less than 15 months away, the Project Team of now over 500 employees, led by Project Executive, Louis Brais, is busy at work on several critical components of the project.

‘Harriet’, the project’s 42ft (12.5m) diameter Herrenknecht Mixshield TBM, began boring the westbound tunnel on October 29, 2012. Now more than two thirds into her second bore, the machine recently successfully completed the most challenging portion of the tunnel alignment. Extremely porous geology demanded that the Earth Pressure Balance (EPB) TBM be adapted to safely mine without confinement overpressure. The innovative technique used to accomplish this was a Water Control Process (WCP) mode (see NATJ September 2012 digital edition). Harriet is now back in EPB mode for the remaining westbound tube excavation, and is expected to breakthrough later this month (April 2013). 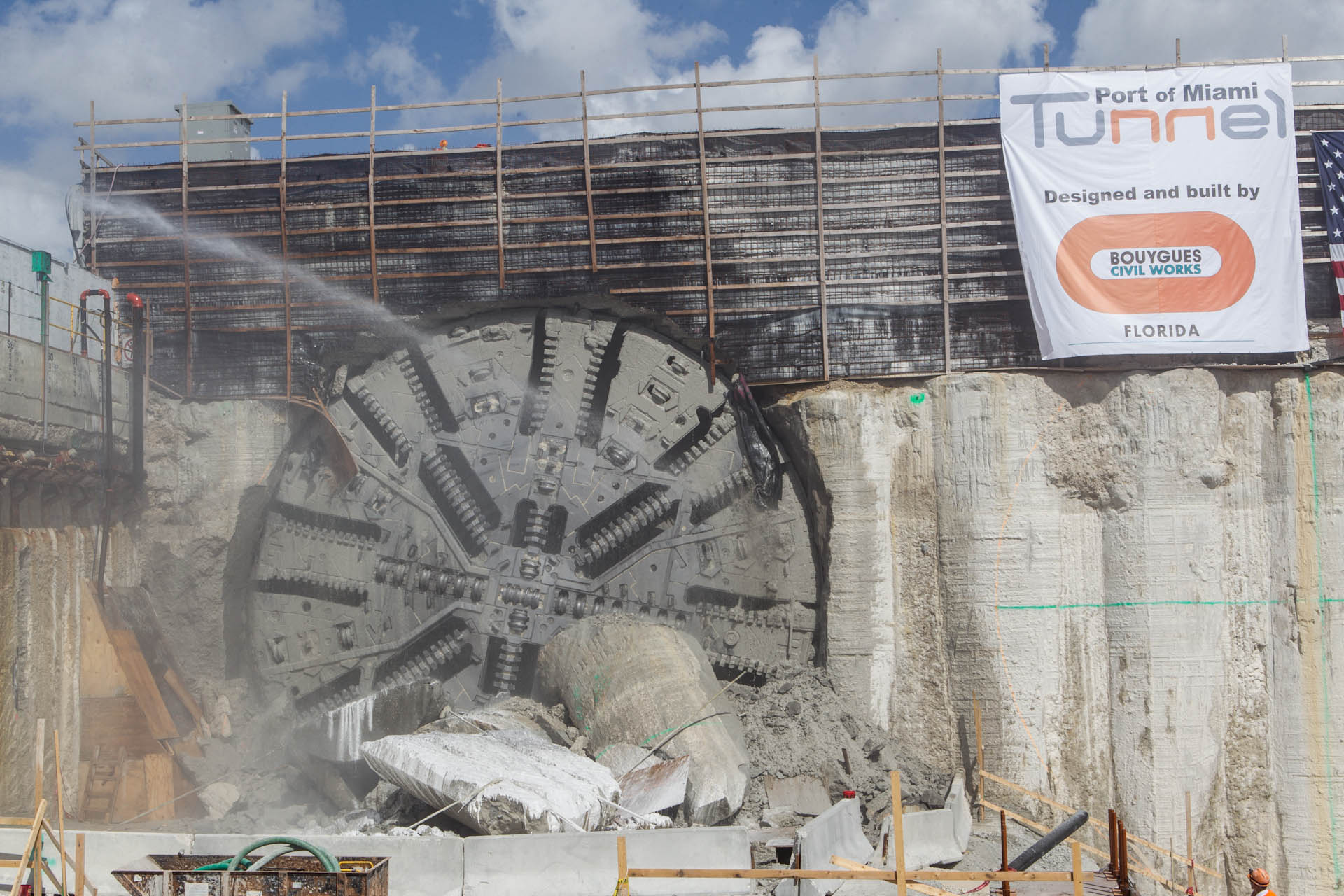 Also for the first time ever in Florida, ground freezing will be utilized in a construction project. Of the five emergency cross passages that will link the twin tubes, cross passages 2 and 3 will be constructed using ground freezing. Due to the highly permeable nature of the soils, pre-treatment is also required. CP1, CP4 and CP5 were pre-treated from ground surface using traditional Cutter Soil Mixing (CSM). Surface restrictions prevented CSM for CPs 2 and 3, so artificial ground freezing via Brine at -30⁰C will be adopted to provide safe support of the ground during excavation and permanent lining.

Full engagement with local communities and project stakeholders remains a continuous priority for the Bouygues team, and the project has enjoyed a good working relationship and supportive feedback from their partners, stakeholders and general public.