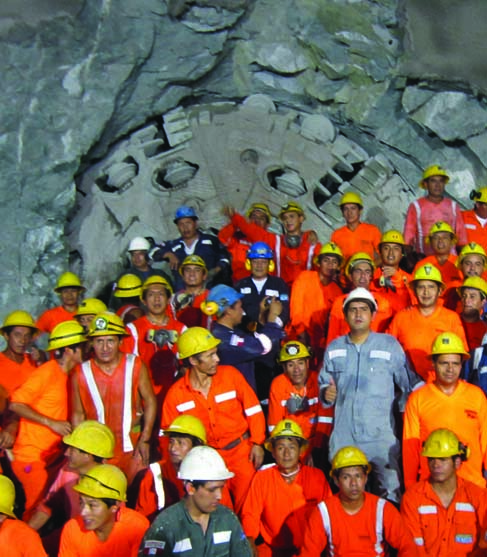 After four years of extreme excavation through high cover and volcanic rock conditions, TBM tunnelling on Peru’s Olmos Trans-Andean tunnel is complete. The 5.3m diameter Robbins Main Beam machine broke through to fanfare and an elaborate ceremony on December 20, 2011. Government officials, contractor Odebrecht Peru Ingenieria y Construccion, and the President of Peru, Ollanta Humala, were among those in attendance.

The 12.5km of TBM-driven section is part of a larger scheme that will transfer water from the Huancabamba River on the Eastern side of the Andes to drought-ridden areas on the Pacific Ocean Watershed. To complete the connection, tunnelling teams drove under cover up to 2,000m, which caused tremendous rock stresses resulting in more than 16,000 rock bursting events—about 17% of which were classified as severe.

The extreme nature of the geology – andesite, dacite, tuff, schist, and pyroclastic breccias up to 250 MPa – was unforeseen and required in-tunnel machine modifications as rock bursting became more severe. Crews removed the roof shield fingers and installed the McNally Support System, manufactured by Robbins under license from C&M McNally. The system consists of steel slats anchored to the roof of the tunnel by steel straps and rock bolts, effectively containing loose and unstable rock. These steel slats form an umbrella that allows the crew to work in a safe environment.  Other changes included reinforcements to the cutterhead, and relocating the platforms and operator’s cab.

The modifications were successful, and no serious injuries occurred during continued rock bursting, in part because of a pre-drilling and sequential boring policy developed by Odebrecht. During a push, workers exited the area directly behind the cutterhead support and stayed 40m back from the face for a period of 30 minutes – allowing rock deformations to occur while protecting workers.

“I am proud to have an extraordinary working team – despite all of the difficulties and challenges they never lost confidence. There were days with advance rates of 35m and days with rates of 50cm in the most difficult conditions. The most important thing is that the designer, TBM manufacturer and contractor worked together to make the necessary adjustments to the TBM,” said Mr. Hiroshi Handa, Production Manager for Odebrecht.