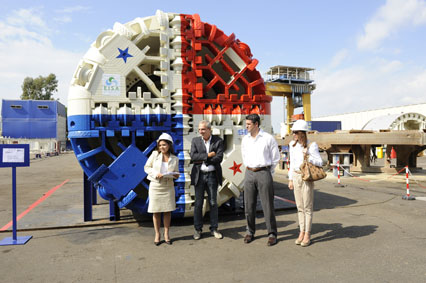 In a contract worth US$100M, SELI has delivered the first EPBM that will be used to bore the 7.9km Monte Lirio headrace tunnel in Panama. The second and almost twin TBM for the 5.2km Pando headrace tunnel will be delivered in November 2010 and is expected to start boring in February 2011.

The Client, Electron Investment SA, awarded to SELI the EPC contract (Engineering, Procurement and Construction) for the two tunnels. SELI is charged with the complete tunnelling cycle, from design to final work handover.

The company will operate in the country through a subsidiary, SELI Panama SA, which was founded in November 2009 to carry out operations and supervise work advancement in the country.

Lahar formations are originally a mixture of water, ice, and volcanic sediments. They are generated when hot gases and magma are ejected under and on snow and ice fields, which rapidly melt and flow down the flanks of the volcano. Due to the complex and variable tunnelling conditions, SELI decided to design and use two mixed face EPBMs.

The two TBMs will install 250mm thick, 1.2m-long precast concrete segments in a 5+1 arrangement during excavation. Once completed, the Pando and Monte Lirio tunnels will have an i.d. of 3m and 3.2m and an external diameter of 3.5m and 3.7m respectively.

Works should be commissioned during 2012.

The Pando and Monte Lirio project is located on the Chiriquí Viejo River in Western Panama and will develop hydropower in the country. The generation of hydropower has decreased from 81% in 1985 to 58% in 2008 (866MG of installed capacity). Most of its potential is located in the West in the provinces of Bocas and Chiriquí.

The Pando and Monte Lirio project involves construction of two run-of-river plants, which will operate in cascades, providing a total installed capacity of 85MW ((Pando, 33MW and Monte Lirio, 52MW) and generating approx. 430GWh of energy per year.

The two plants are being developed by Electron Investment S.A., a joint venture between Inveravante Inversiones Universales S.L. of Spain (51%), and the Panamanian entity Grupo Eleta (49%). The total project cost is estimated to be US$291.7M.

The Pando hydropower plant is located about 4km west of the town of Volcán, Bugaba District, Chiriquí Province. It includes; a 32m high water-edge-type dam; a reservoir of 900,000m3 of volume; the 5.2km-long headrace tunnel and 63m-high piezometric shaft; and a powerhouse.

The Monte Lirio hydropower plant is located in cascade downstream of the Pando hydropower plant, about 1km from Plaza Caisán town, Renacimiento District, Chiriquí Province. It includes; a 15m high dam at the same location as the Pando powerhouse; a reservoir; a 7.9km-long headrace tunnel and a 74m-high piezometric shaft; a powerhouse.

The tailrace of the Pando powerhouse is connected directly to the Monte Lirio headrace tunnel.