Petra, a robotics company investigating undergrounding critical utilities through hard geologies, has announced the completion of a 6.1m tunnel through hard rock and announced its Series A funding led by DCVC, the leading Deep Tech venture firm.

Founded by CEO Kim Abrams and CPO Shivani Torres, Petra says it has invented a new hard rock boring method, transforming the way utilities are buried underground. “As the former President of SoCal Edison, I oversaw capital projects in urban, suburban and rural mountainous areas. A robot that can bury utility facilities in bedrock would have been a game-changer for us,” said Bob Foster, a Petra Advisor. 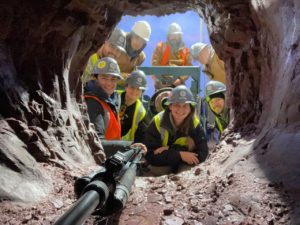 Petra says it is transforming the economics of how utilities are buried by tackling the hardest problem in underground construction: how to reliably and cost effectively bore utility tunnels through difficult geologies. Petra says its technology can tunnel faster and cheaper than conventional undergrounding methods, and through high-grade hard rock previously thought impenetrable.

“We’ve invented a completely new way to excavate rock and this will have profound implications on the future of tunnelling,” said Petra CEO and co-founder Kim Abrams. “By delivering a boring solution that affordably undergrounds utilities through high-grade rock, we can finally protect communities from exposure to wildfires and ensure the safety of critical infrastructure in disaster-prone areas, especially in places like the Sierra Nevada mountains, Rocky Mountains, and coastal regions. Petra represents a new day in tunneling that changes the landscape of what we thought possible.”

“Petra’s semi-autonomous undergrounding robot, called ‘Swifty,’ successfully completed a 6.1m bore through hard Sioux Quartzite, where we averaged an astounding one inch per minute in a geology usually excavated by dynamite,” said Ian Wright, Petra’s CTO and a Tesla co-founder. “No tunnelling method has been able to tunnel through this kind of hard rock until now.

The company was founded by CEO Kim Abrams and CPO Shivani Torres, and has raised a total of $33M in funding from DCVC, ACME Capital Congruent Ventures, 8VC, Real Ventures, Elementum Ventures, and Mac Venture Capital.