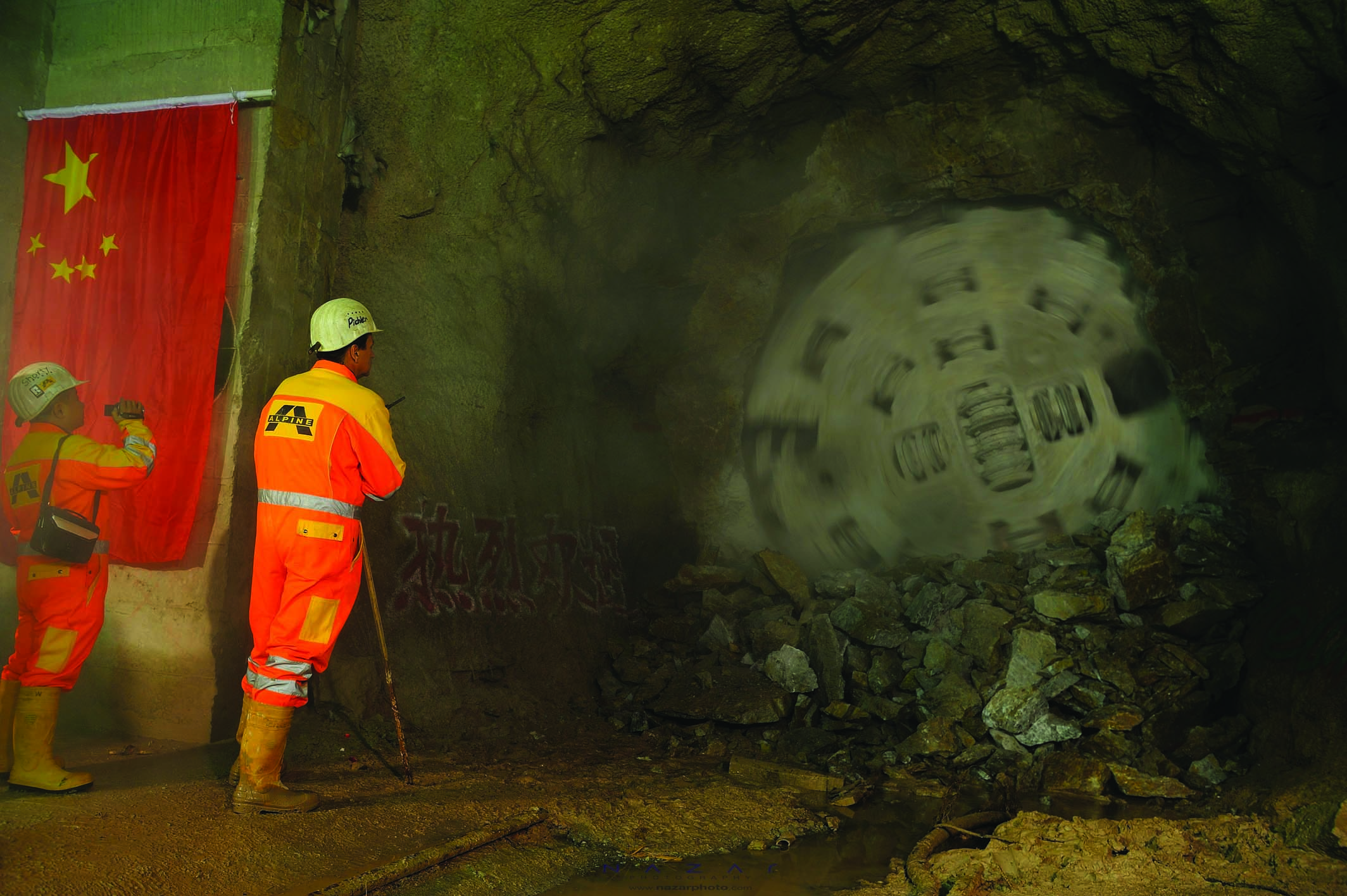 More than 500 people gathered at the ceremony to celebrate the breakthrough of the veteran Robbins Double Shield TBM in a remote area of Shanxi Province to mark the occasion.  “The key to this project’s success was the crew.  We had the right mix of experienced people and young people hungry to learn,” said Paul Bargmann, Head of the Machinery Dept. for Alpine Bau GmbH. The Robbins machine successfully mined through difficult geology including coal seams and abrasive sandstone with up to 70% quartzite content. Advance rates topped out at 50 ring sets, or about 70m per day.

The machine was previously used on a record-breaking 12km long segment of the Yellow River Diversion in 2000. On that project, the TBM set two world records in its size class of 4 to 5m: best month (1,855m) and monthly average (1,352m). Both records still stand.

Though the TBM was already designed for similar geology and kept to its original specifications for the Pinglu Tunnel, the back-up was modified. “The back-up frame was extended from one stroke to two strokes. This was a key change, especially for such a long tunnel,” said Meik Mueller, Technical Director for Alpine’s Asia Division.  The modification allowed the machine to maintain good advance rates despite transit times of up to 70 minutes for muck trains traveling from the machine to tunnel entrance.

Lining for the Pinglu Tunnel, consisting of unique hexagonal segments, was produced near the jobsite by Alpine. A crew of nearly 400 people worked at the remote site and segment factory to cast the specialized structures.  During tunneling, the segments were placed in rings of four elements, in a honeycomb configuration staggered longitudinally. The design was created to allow for high-speed, continuous boring with no downtime while erecting segments.

The completed Pinglu Tunnel will go into operation in October 2011, connecting to the North Main Line of the Yellow River Project to transfer water to Pinglu, Shuozhou, and Datong areas.  Over 100 km (62 mi) of the South Main Line were excavated by five TBMs, including four Robbins Double Shields, between 1999 and 2001. The entire scheme will transfer water from the Yellow River to dry regions of Shanxi Province, an area that receives just 400 mm (16 in) of rainfall per year on average.