California’s Natural Resources Agency recently released 10,000 pages of documentation relating to its Bay Delta Conservation Plan, which calls for the construction of one of largest water tunnel projects ever contemplated in the US. The entire plan will cost an estimated $25 billion, with the construction of the preferred tunnel option estimated at around $13 billion. 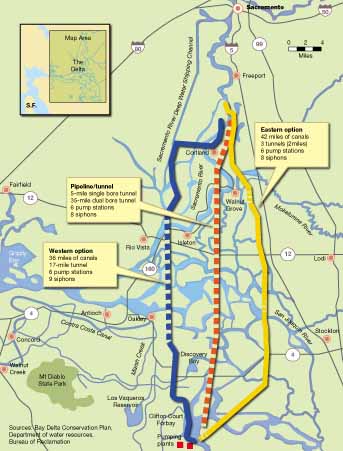 The 37-mile (60km) long, 33ft (10m) diameter, twin tunnels would divert flows from the Sacramento River deep under the Sacramento-San Joaquin River Delta to the head of the California Aqueduct, near Tracy. Pumps that currently serve this aqueduct and its nearby federal counterpart kill millions of fish every year and are widely blamed for altering the habitat of the estuary, once among the world’s most productive fisheries.
The tunnels would move intakes upstream to locations thought to be less harmful to fish, creating more than 110,000 acres of new fish and wildlife habitat. It would also secure the freshwater diversions from threats such as earthquakes, floods and sea level rise, ensuring fresh water supply to 25 million Californians and more than 1 million acres of farmland.
The state released major pieces of the working draft of the preferred plan, along with preliminary chapters of environmental impact documents that must win approval of state and local agencies before the tunnel project can go ahead. State officials hope to have a final version of the plan by the end of the year.
Current industry speculation is that project delivery partner, California’s Department of Water Resources (DWP), would need somewhere between 10 and 20 pressurized TBMs to construct the tunnels proposed in the plan. In addition, several concrete manufacturing plants for production of tunnel lining segments would also likely be required. Ways of packaging potential tunneling contracts to bring values down to competitive amounts will also pose a challenge as the project moves ahead.
Construction funding would come from revenues generated by water agencies in the areas that directly benefit from the project, including Alameda and Santa Clara counties.

If the project does gain the required environmental approvals the first advance construction contracts could be awarded as early as next year.