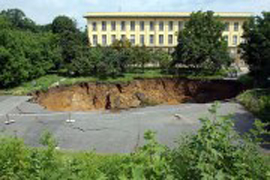 A report by Prague’s Mining Office into the causes of the third collapse of the city’s 6km long, US$1.3bn Blanka Ring Road Tunnel on the 6th July, that left a 15m crater outside the Ministry of Culture building in District 6, will not be officially released for at least two to three months, Czech media say. Local concerns have been raised by the apparent continuation of blasting works, despite the lack of a report, whilst Prague Mayor Pavel Bém has said in a statement that Media reports of the collapse were sensationalistic and that the incident would not affect the projects 2016 completion date.

“We accept Metrostav’s (the contractor) statement by which the supplier claimed full responsibility for construction safety and the need to comply with all contractual obligations. I confirm that despite the investigation of the accident, it is possible to keep the deadlines,” he said.

“We are not investigators: This is for other institutions. However, the public funds the project, and we are responsible to the public for its timely and safe completion. This is an absolute priority for the city. It is the task for Metrostav to guarantee this for us, and our task is to be prepared for other alternatives, including possible contract termination. We feel responsible for the project, responsible for keeping deadlines, and that is why we consider this the last solution,” the Mayor’s statement read.

“It would have been irresponsible not to be prepared for such an option, legally and factually, without dramatizing the sensational coverage it receives in the media. It is a pragmatic approach that every investor would have taken if multiple problems occurred when building a family house.”

Early speculation would appear to point to a combination of factors that lead to the collapse. A spokesman for contractor Metrostav said, “Water could have gotten into the tunnel either by an inappropriately constructed parking lot above it, old fortification work or even unrecorded trenches.”

“Or it could have been human failure; for example, failing to comply with the plan for disposing of the temporary vertical support,” he concluded.

The Blanka Tunnel is the largest tunnelling project in the Czech Republic and connects the north-western part of the City Circle Road between the Malovanka and Pelc Tyrolka section.

In the NATM sections a shotcrete primary lining is being placed, supported with lattice girders, welded mesh and rockbolts. The excavation sequence consists of a top heading, bench and invert. The thickness of the primary lining varies from 200 to 400mm, depending on the NATM excavation support classes and the dimensions of the excavated cross section, which is 119m2 for the double-lane tunnel and 173m2 for the triple-lane tunnel.