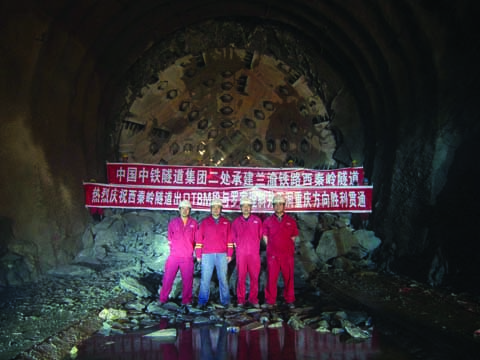 The 18th Bureau of China Railway Tunnel Group Co. Ltd. (CRTG) has set what is believed to be a world record advance rate for a TBM in the 10-11m diameter range, with 235m in one week, and 841.8m in one month during Spring 2011 using its 10.2m diameter Main Beam hard rock TBM on China’s West Quinling Twin Tunnels.

The record-breaking Left Line machine at West Qinling also broke through into an intermediate adit tunnel on May 28, 2011 at the 5.5km mark, where it is now undergoing planned maintenance and inspection. Within several weeks the machine will be launched again to bore the rest of its tunnel.

Ground has consisted mainly of phyllite and limestone, often with high quartz content. Crews have also encountered fault zones of breccias and clay, as well as a 600m long section of badly broken rock. Despite the conditions, only about 100 cutters have been changed on the Left Line machine so far. The Right Line machine, launched a month later and about 1,000m behind, is also experiencing good cutter wear.

To combat the tough conditions, the machines have been specially designed with adaptable ground support systems that replaced the roof shield fingers in the L1 area.  The new roof shield canopy contains mesh pockets, rather than fingers, for installation by workers under the safety of the shield structure. Other design aspects include improved ring beam building, separate roof and probe drills, and materials handling. “The ring beam erector and the segment hoist have been very successful.  Overall, the machine is good,” said Mr. Wang, Spare Parts Manager & Engineer for CRCC.

The West Qinling tunnels are part of the Chinese Government’s Lanzhou to Chongqing Railway project, an extensive 820km long scheme that will link the capital of Gansu Province (Lanzhou) with southwestern Chongqing, a mega-city of over 35 million people. The entire railway is expected to open to traffic in 2014.