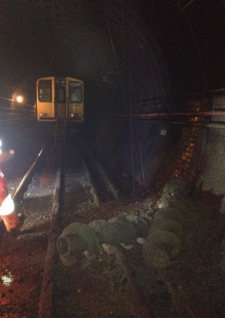 The incident happened after the driver of the 10.02am First Capital Connect (FCC) train from Moorgate, in London, to Welwyn Garden City, in Hertfordshire, saw muddy water pouring on to the roof of his train just north of Old Street station.

He reported the incident and all rail services were stopped.

At 11.05am a Network Rail operations manager joined another driver on board an empty train from Moorgate to investigate the problem.

As the train approached the area at low speed, two large piling drills burst through the lining of the tunnel, dropping brickwork into the tracks. The train stopped in time but the driver was shaken by the incident.

The rail route, used by two million City workers every year, will remain closed while the incident is investigated and repairs are carried out.

British Transport Police have visited an office construction site above the line and the Rail Accident Investigation Branch has been notified.

FCC managing director Neal Lawson said: “This was a serious incident that could have ended very differently had it not been for the vigilance and prompt reporting and actions of our drivers. Whoever is responsible must be held to account.”

Network Rail route managing director Phil Verster said: “Our engineers are on site assessing the damage and we will restore the railway as soon as possible.”