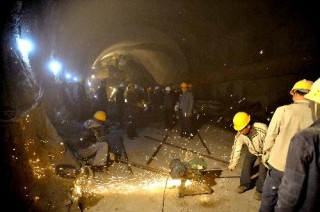 Workers toil around the clock to try and reach the 10 tunnellers trapped following Friday’s collapse during construction of a railway tunnel in Zhuozi County of Ulanqab City, in North China’s Inner Mongolia. (Pic – Xinhau)

Reports from the scene said that by Sunday rescuers had drilled 27m through the collapsed rubble to the area where the workers are believed to be, and have started pumping in fresh air. Some 2000 cubic meters of rock caved into the tunnel at 2.35pm on Friday.

“We were working in the tunnel when gravel and dust began pouring down,” said Li Tiying, one of the six survivors. “We ran, and cried out for everyone else to run with us.”

When he had escaped to safety, Li said he took one last look at the tunnel and saw dim light inside. “But within seconds, the tunnel was sealed off by stones and sand.”

The tunnel is part of a railway being built to link Ulanqab City’s Jining District and Baotou City, Inner Mongolia.