The Ontario government is entering into the next stage of planning, design and procurement for the future Eglinton Crosstown West Extension with the release of a Request for Qualifications (RFQ) for the second advance tunnel contract for the section of underground works from Jane Street to the future Mount Dennis Station. The project is designed to bring better rapid transit to Etobicoke and Mississauga by delivering on the largest subway expansion plan in Canadian history.

“Since breaking ground on this priority project in July, we’ve made remarkable progress on the Eglinton Crosstown West Extension,” said Caroline Mulroney, Minister of Transportation. “Ontario is more committed than ever to working with our partners to build subways faster. Together, we will make life easier for the people of Etobicoke and Mississauga, support the creation of thousands of jobs, and spur economic growth.”

The province will also release a pre-qualification for the transit project’s elevated section of tracks from Scarlett Road to Jane Street in the coming weeks. Infrastructure Ontario and Metrolinx will evaluate the submissions and announce a shortlist of qualified proponents for both contracts in spring of 2022.

“Today’s announcement marks an important milestone in the progress of the Eglinton Crosstown West Extension,” said the Honourable Dominic LeBlanc, Minister of Intergovernmental Affairs, Infrastructure and Communities. “As the project takes shape, it brings us closer to our goal of giving more residents across the Greater Toronto Area access to clean, modern and reliable public transit.”

Once complete, the Eglinton Crosstown West Extension will extend the Eglinton Crosstown LRT by 9.2 km, from the future Mount Dennis Station to Renforth Drive, running mostly underground. This extension will connect riders to destinations across the Greater Toronto Area (GTA) through connections to UP Express, GO Transit, TTC and MiWay. Ontario is also exploring a potential extension of the line to Pearson International Airport. 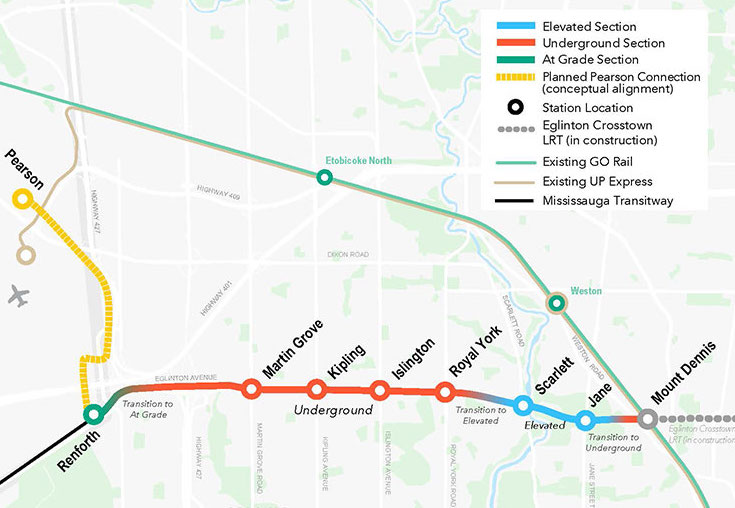