Companies have until September to respond to the RFQ, with a list of qualified consortiums expected to be published this October. Those companies will then have nine months to respond to the full Request for Proposals (RFP), with the final contract due to be signed in December 2012. Construction is currently scheduled to commence in January 2013, and last five years, with full service on the LRT system expected by 2019.

Earlier this year, the city council approved plans to accelerate the project’s timeline by asking the private sector to play a greater role in the scheme.

The 12.5km (7.7-mile) OLRT line will run between Tunney’s Pasture and Blair Road via the 3.2km (2-mile) long Downtown Ottawa Transit Tunnel (DOTT). Construction of the twin-tube tunnel is currently envisaged as EPBM, in order to deal with challenging groundwater issues and varying ground conditions anticipated along the alignment.

Thirteen stations are also proposed along the route, including four new below grade stations in the tunnel portion of the alignment, while the remainder will be situated along the above-grade corridor that generally follows the existing Transitway. 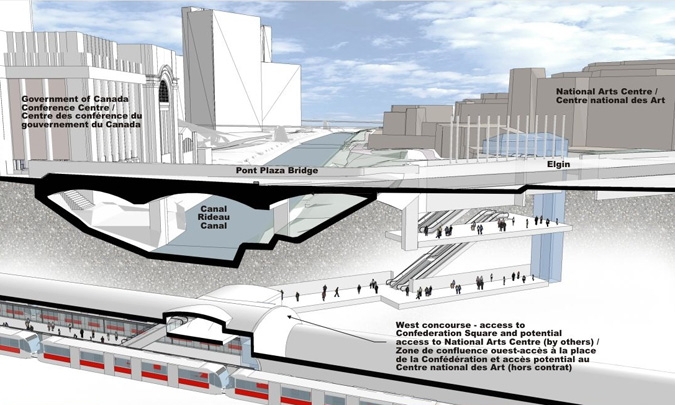 The depth of the tunnel will average at 30m-35m (98ft-115ft) below the surface, but will extend as far as 44m (145ft) below grade in order to avoid impacts to high-rise building foundations, utilities and the Rideau Canal, which is a national landmark and a UNESCO designated world heritage site.

Preliminary geotechnical and hydrogeological investigations, undertaken by Golder Associates, indicate the majority of the tunnel will be excavated through limestone with the remainder of the route, from Rideau to Campus, being undertaken in glacial till.

Borehole investigations also indicate a number of inactive faults crossing the tunnel alignment in the downtown core. These typically comprise 0.5m to 2m (1.5ft-6.5ft) wide zones of broken to crushed rock with calcite veining and gouge material comprising sand and silt. Bedrock quality in these fault zones ranges from poor to good.

Capital Transit Partners, a joint venture partnership of STV Canada, Jacobs Associates, URS Canada and Morrison Hershfield, is the preliminary engineer and project manager for the project. Delcan Corporation was the prime consultant on the project during the initial planning and design stages (with Halcrow on the tunnel).

The RFQ calls for respondents that have successfully designed, managed, constructed and maintained a light-rail system of similar size and scope. The city is seeking bidders with a very wide range of capabilities, from overseeing tunnel excavation to managing traffic during construction and devising public-consultation plans. Bidders will also be required to demonstrate that they can deal with the financing of a multibillion-dollar project.

The RFQ Submissions will be scored on a 100-point scale assessing qualifications, which is broken down as follows:

The city of Ottawa has set aside a CA$2.1 billion (US$2.0 billion) budget for this project. Subject to City Council approval, the city will provide CA$900 million (US$865 million) from its own budget, while the rest will come from the Federal and Provincial government, each providing up to CA$600 million (US$575 million) contributions.

The OLRT project is the crucial first step in Ottawa’s Transportation Master Plan, which calls for more than 40km (25-miles) of new light rail to be built over the next 20 years. Once in operation, the line from Tunney’s Pasture to Blair Station will provide reliable cross-town transit, alleviate congestion downtown and save up to 100 million dollars in current annual operating expenses.

The city’s previous light-rail plan, ultimately aborted in 2006, attracted a shortlist of three consortia, led respectively by Siemens, Bombardier and Kinkisharyo. Current speculation is that at least two of these manufacturers will bid on the current scheme.

Frontier-Kemper Constructors (“Frontier-Kemper”), has been awarded a contract valued at approximately CAD$341M (US$267M) by FortisBC Energy, Inc. for the tunnel…