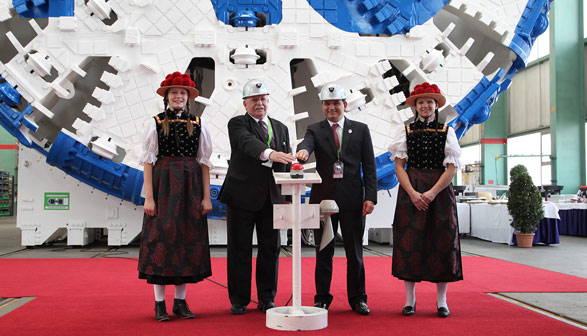 The machine will tunnel the stretch between the Gavea and General Osorio Stations, and will be the first TBM ever used in Rio, with all previous underground construction works built using conventional techniques.

The JV will bore through ground conditions consisting of sand and Gneiss whilst erecting a pre-cast concrete segmental lining. To ensure the machine can cope with the different ground conditions along the tunnel route, the Herrenknecht engineers designed it so it can be converted in the tunnel.

Herrenknecht project manager Carlos Manzano Rey explained, “It is planned that the machine will cover the first 300m in open mode, then be converted for about 3,000m in closed EPB mode. Finally, around 1,300m will again be tunnelled in open mode.” In open mode, the firm hard rock – gneiss – is transported away on a conveyor belt. In closed EPB mode removal is handled via a screw conveyor in the predominantly sandy soil. Another special feature of the machine is the articulation in a diameter range of more than 11m. It will allow the tunnelling teams to cope with the tight bend radius of just 250m in some cases.