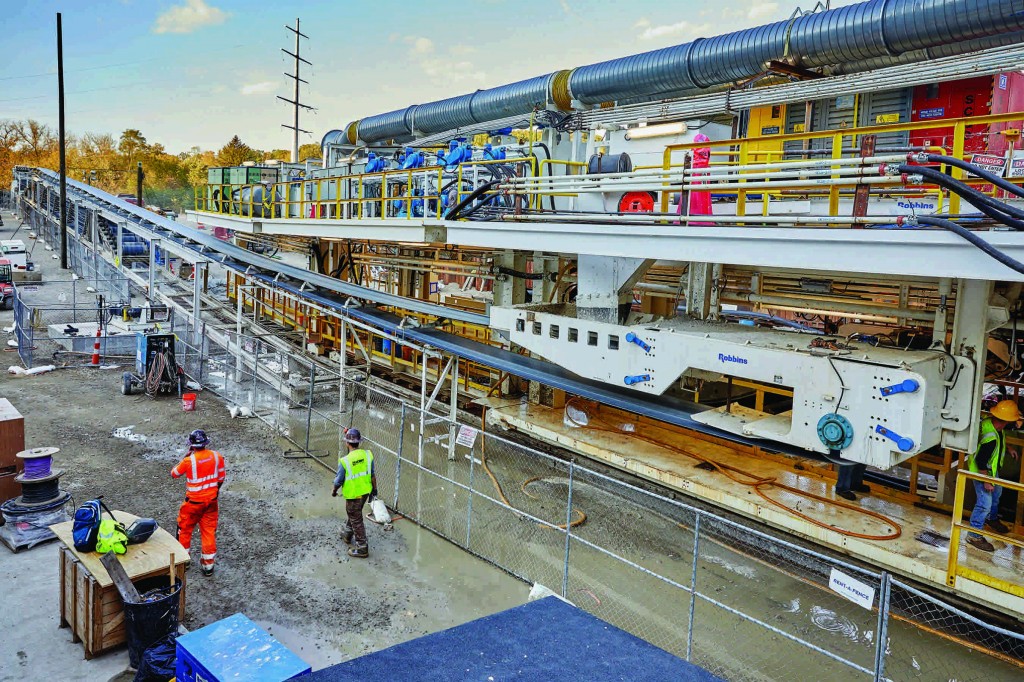 On October 18, 2017, a Robbins 9.26m diameter Crossover machine started up at the Akron Ohio Canal Interceptor Tunnel (OCIT) in Ohio, USA—but the startup wasn’t the company’s only milestone. Running behind the Crossover TBM is the 100th Robbins Continuous Conveyor system supplied for muck removal.

The side-mounted conveyor is a design standard, but the landmark is a significant one: “With this system we have provided more conveyors than any other TBM conveyor supplier,” claimed Dean Workman, Robbins Director of Conveyors, Cutters, & SBUs. Counting conveyor systems the company has on order but has not yet delivered, that number is now well above 100, Workman added.

In the first of a series of 6 Podcasts Professor Dix explores the link between the prosperity of nations and the benefits of underground infrastructure such as access to clean water, sewerage, transportation and power.
Find out more...

The Akron OCIT conveyor system consists of the belt plus a main drive, splice stand, storage unit, and advancing tailpiece, operating through several curves requiring patented self-adjusting curve idlers that correct themselves based on varying belt tension and belt load. The system discharges onto a customer-supplied overland conveyor, which delivers the muck to a large storage yard near the portal site. The belt was designed to handle variable geology, from soft soils to partial face rock and finally full-face shale rock.

The 100th conveyor system has been refurbished and customized for the job in a process that Robbins has been perfecting for decades: “We design our conveyor systems to last for five to ten years, but many last for decades longer. We have systems utilizing components that have been in operation for 30 years. We haven’t reached a limit for many of our systems—for example we had a specialized conveyor system built more than a decade ago for the Parramatta Rail Link in Sydney, Australia. Those components were refurbished for a job in Atlanta, Georgia, and now they are being used at the Dig Indy tunnels in Indianapolis, Indiana.  These are long and challenging tunnel drives and the components are up to it.” While the Akron OCIT conveyor is just beginning to haul muck, it is sure to be a benefit throughout the project’s varying ground conditions.

The conveyor in Akron is also part of a long history for Robbins conveyors—the first of which (not counted in the list of 100) was the first ever continuous conveyor system used behind a TBM. That prototype, developed by founder James S. Robbins in 1963, was successfully used behind the 11.2m diameter Main Beam TBM at the Mangla Dam project in what was then known as West Pakistan. While conveyors would not be adopted as a standard method of muck removal for many years afterward, the project laid the groundwork for future success.

Today’s conveyor systems are capable of spanning dozens of kilometers and hauling 1,800 metric tons (2,000 US tons) an hour or more.  It’s a legacy that Workman sees will continue to grow: “This is my 20th year with Robbins and I remember when we started our conveyor list.  It is amazing to look at all of the jobs and things we’ve done. It’s amazing to see what these systems can do.”