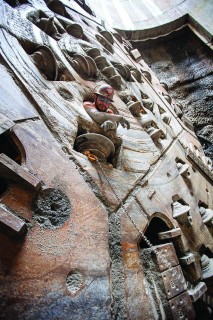 A Robbins Double Shield TBM achieved a timely finish at the Black River Wastewater Tunnel in Lorain, Ohio, where it broke through on April 29. The 1.7km (1-mile) long EPA-mandated tunnel will prevent heavy rains from triggering sewage overflows into the Black River, which empties into Lake Erie. The 7m (23ft) hard rock machine reached excellent advance rates in the area’s soft shale, averaging 21m (70ft) per day.Onsite First Time Assembly (OFTA) also shaved valuable time off of the project timeline; the TBM was launched on November 18, 2013, just three months after assembly began. The machine and continuous conveyor system were assembled at the jobsite with the help of Robbins Field Service Technicians, rather than in a shop. OFTA has been used on many Robbins projects worldwide, but this marks the first use of the method in the USA.

Contractor Super Excavators was proud of the TBM’s success, and that they were able to use local help to build the tunnel. “Our team was able to adapt and learn,” said Gregg Rehak, Tunnel Supervisor for Super Excavators. “We were able to hire locals and do on-the-job training with them.” Not only did this boost the town of Lorain’s economy by creating jobs, but it also gave local construction workers experience in the tunneling industry.

Cleveland shale made for speedy excavation; so fast that it was challenging for the continuous conveyor system to keep up at times. Rehak explained that the fairly soft ground also made for minimal cutter wear: “We only changed seven cutters during the bore, four of which probably could have made it to the end, but were changed for precautionary reasons.” 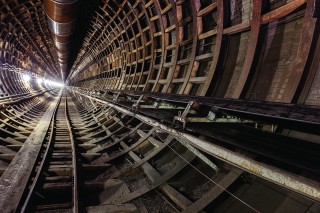 Due to the geology, a unique tunnel lining method was used. Instead of traditional concrete segments, ring beams, wire mesh, and lagging were installed in 18-inch intervals. Up to 25% of the soft shale geology consisted of layered and laminated rock that broke from the tunnel crown before ring beams could be expanded, requiring extra chipping and rock relief.  Once workers fine-tuned the technique, they were able to do 12 to 14 rings per day, even in the sections of bad ground. In more stable sections production averaged 18 to 20 rings per day. Now that tunneling is complete, a final monolithic pour will solidify the lining.

“The Robbins machine performed quite well,” commented Rehak. “Now we have to remove the TBM, which will take about four weeks; then rebar tying and concrete pouring can start.” Once finished, the tunnel will have a storage capacity of 42 million liters (11 million gallons) per day, which will provide a significant boost in water quality for Lorain. Final project completion is set for 2015.