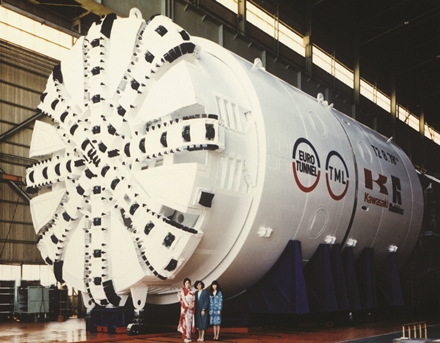 Over 40 contractors, consultants, owners and suppliers gathered last week at the St. Ermin’s Hotel in Westminster, London, to hear about Robbins’ new Crossover TBM technology. Historically known as a hard rock specialist, Robbins wanted to demonstrate its track record in machines that can switch between different modes to cope with varying ground conditions.

“We want to get the message out to the UK market that we can build a machine that can operate in multiple, complex ground conditions,” said Sales Manager Tyler Sandell. “We have been doing it since the Channel Tunnel, although the focus has changed. Back then, the reason for the multi-mode capability was that we were unsure of the geology, now tunnels are being driven through geology that we know is complicated and varied.”

Bill Clark, Chief Executive of Sheffield manufacturer DavyMarkham also spoke at the seminar, revealing a relationship with Robbins that dates back to the mid-1980s. DavyMarkham built two of the five Robbins TBMs that were used to create the Channel Tunnel and now supplies components to Robbins; the firm is currently manufacturing a huge cutterhead for a Robbins machine bound for Turkey.

Clark used the event to call on the assembled audience, which included members of the HS2 team, to think about creating UK jobs when making their procurement decisions. “Please think carefully about the socio-economic dimensions of some of these projects,” he urged.

Robbins outlined its range of Crossover machines: XRE which can work in hard rock or EPB mode, XSE for slurry and EPB, and XRS for hard rock and slurry. Sandell was keen to emphasise that every machine was customised, according to the needs of the project and the contractor, but that some standardisation allowed for more cost-effective machines.

“Having standardisation of certain components allows us to have smaller inventories which can make for a shorter delivery time and allows us to be price competitive,” he said.