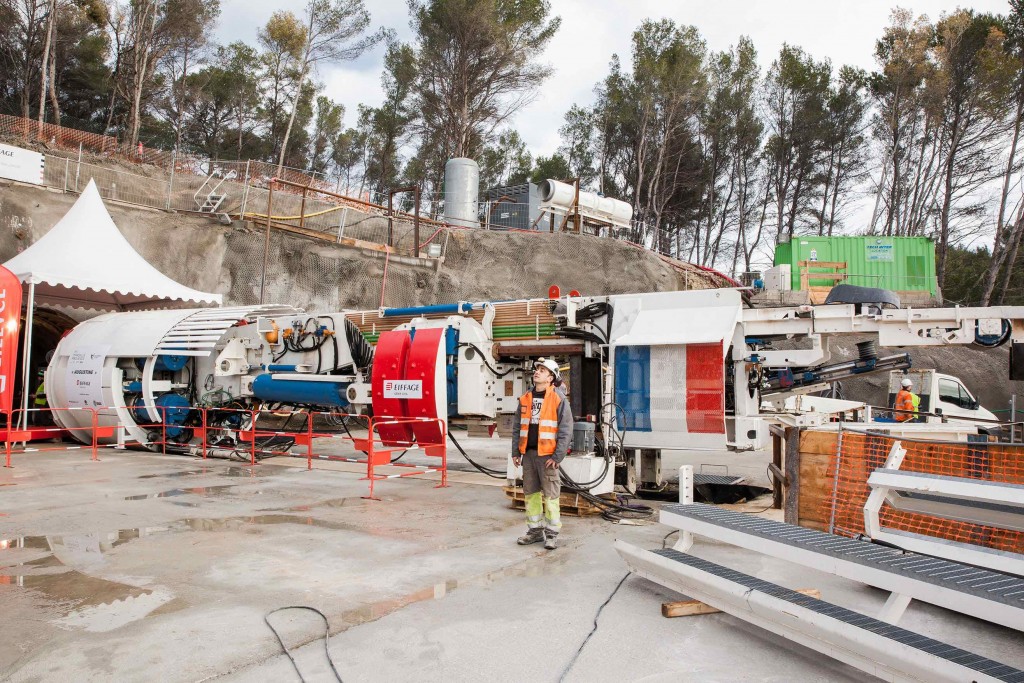 A 3.5m diameter Robbins TBM is currently undertaking its eighth bore after being launched by contractor Eiffage Civil Engineering on March 3 on the 2,750m long tunnel drive for the Galerie des Janots project in La Ciotat, France.

The TBM, which was extensively modernised during a rebuild, has previously completed seven other successful projects across Europe and Hong Kong. This time, it will bore the Janots gallery to improve access to water in the communities east of the Aix-Marseille-Provence metropolis (Cassis, Roquefort-la-Bédoule, La Ciotat and Ceyreste). “It’s a single machine 3.5m in diameter, 250 metric tons, and 135m long, that will work 24 hours a day for almost 10 months during this operation,” says Marc Dhiersat, Project Director of Galerie des Janots for Eiffage.

Currently, the machine is ramping up as back-up decks are being installed. As of April 2017, the machine has bored more than 51m, mainly encountering limestone. “Limestone is a rock easy to dig, but one can be confronted with the phenomenon of karst,” explains Loïc Thévenot, Director of Underground Works for Eiffage. “For this purpose, the tunnel boring machine is equipped with a probe drill. If the karst is small, we will fill it with concrete. If it is large, we will erect a small parallel gallery.”

The TBM will pass under Le Parc National des Calanques, with cover between 15 and 180m, in order to replace the pipes that are currently being utilized for the water supply networks. “[The current pipes] have a capacity of transit limited to 330 liters per second, which is largely insufficient in the summer period. The objective of the operation is to increase to 440 liters per second,” says Dhiersat. Once the project is complete, networks can easily be maintained in comparison to the old pipes currently running beneath the railway.

Galerie des Janots is one of the fourteen operations designed to save water and protect resources, which are being carried out by the Aix-Marseille-Provence metropolis, water agency Rhône Mediterranean Corsica, and the State Government. The future Janots gallery will replace existing pipelines currently located in the railway tunnel that have significant safety and vulnerability deficiencies with estimated water losses of 500,000 cubic meters (132 million gallons) per year. According to Danielle Milon, Mayor of Cassis, “This is an investment of US$59M with 11M in aid from the water agency. This project required 10 years of reflection and work to improve water supply. And water is essential for the development of each municipality, and for citizens’ well-being.”