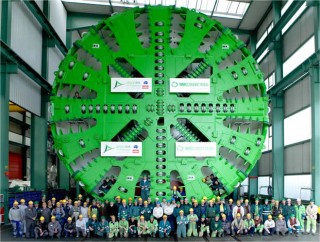 The first breakthrough of one of the two 12.45m diameter Herrenknecht EPBMs working on Brisbane’s 6.7km long Airport Link project has occurred deep underground at Wooloowin, marking the halfway point of the machine’s 2.5km journey to Lutwyche.

“Australia’s largest TBM, Rocksy, has already excavated over 1,200m of tunnel since she was launched at Kalinga Park in July,” announced Minister for Infrastructure and Planning Stirling Hinchliffe.

“Considering that this time last year pieces of the machine were being shipped to Brisbane from Germany, this shows great progress on the project.”

“Working around the clock, seven days a week, the TBMs have progressed at rates of up to 110m a week, digging the tunnels and lining them with concrete segments as they go,” Mr Hinchliffe said.

“Across the project, over 9km of tunnels have been completed, with the TBMs Rocksy and Sandy alone having excavated more than 2.2km.

“Over 300,000 cubic metres of spoil has been generated by the TBMs and transported to Nudgee Road via a 2km spoil conveyor, eliminating almost 40,000 spoil truck movements from local streets in Clayfield.

“This is a terrific outcome for locals and commuters using those roads.”

A total of 11,000 pre-cast concrete segments have been used so far to make up the rings that form the tunnel lining, each weighing approximately seven tonnes.

15 million hours have been worked and the projects have surpassed their expected peak employment bringing the jobs total to 3,600. The projects are expected to create 12,000 direct and indirect jobs.

Inside the excavated tunnels, back-up work has commenced to construct the smoke ducts and tunnel cross passages. When this work is complete, focus will move to the installation of ventilation fans, traffic management devices and tunnel safety systems.

Thiess John Holland Project Director Gordon Ralph said the second TBM, Sandy, was expected to break through into the Kedron caverns next month, with both TBMs scheduled to complete their 2.5km journey by the middle of the year.

“Once tunnelling is complete the cutterheads for the massive TBMs will be buried underneath the tunnels they have created,” Mr Ralph said.

“The two TBMs were custom built for the Airport Link project and this solution will reduce the complexity involved in removing the cutterheads, while avoiding the need for additional surface work in the Lutwyche area.”

“More than 70% of the project is now complete and when Airport Link opens in mid-2012, it will be the first major motorway connecting Brisbane city with the airport and northern suburbs,” he said.
”It will improve travel times, providing six new lanes for drivers between Bowen Hills and Kedron and four new lanes between Kedron and Toombul.”

The project, which is being designed and constructed by Thiess John Holland, along with the Northern Busway (Windsor to Kedron) and the Airport Roundabout Upgrade, is part of a massive $4.8bn infrastructure investment on Brisbane’s Northside.