On October 22nd 2020, the Supervisory Board authorised the Board of Directors of The Brenner Base Tunnel client, BBT SE, to dissolve the contract with the ARGE H51 Pfons-Brenner Consortium.

The complete Brenner Base Tunnel is a 55km long,  8.1m diameter twin bore that runs for  between Innsbruck in Austria and Fortezza in Italy.

The letter notifying the dissolution of the contract was sent by BBT SE to ARGE H51 on October 27th 2020, and said: “The final refusal to carry out the contractually agreed works and the subsequent loss of trust has unfortunately forced us to dissolve the contract with ARGE H51. Even with the prospect of the termination of the contract, ARGE H51 did not change its position and decided to make public its contractual interpretation. To ensure that the works for the Brenner Base Tunnel can continue as quickly as possible, an in-depth analysis of the entire project has already been started with the aim of launching a new tender procedure,” explained the two CEOs of BBT SE, Gilberto Cardola and Martin Gradnitzer.

But contractor Porr has firmly hit back at the decision saying in a company statement: “The withdrawal announced by BBT SE from the contract concluded on 28 March 2018 between the consortium H51 Pfons-Brenner and BBT SE to build the Pfons-Brenner lot of the Brenner Base Tunnel is plainly unlawful and therefore the contract remains valid. PORR AG will take every step necessary to protect its rights.”

Karl-Heinz Strauss, CEO of PORR AG said: “This unilateral termination of the contract is clearly illegal. The contract between consortium H51 and BBT SE is still valid, even in the event of a new contract being awarded.”

Renowned university professor Dr. Andreas Kletečka came to the same conclusion when writing his legal opinion saying: “In the event of an illegal termination, BBT would have to fulfil the contract with the consortium in any case and possibly also a second contract with a new contractor. BBT would not only have to pay for the loss of profits, but also cover all costs for the ongoing availability of the entire consortium workforce and its technology. This in itself may come to almost as much as the original contract sum.”

Porr’s CEO, Strauss continued: “For at least two years now, the Management Board and Supervisory Board of BBT SE have known that they made a mistake in the tendering process that would threaten the safety of the tunnel”.

Strauss underlined that if BBT were to take safety concerns seriously, the Management and Supervisory board would have to admit that they had set parameters in the tender for cost reasons that would make the safe construction of the tunnel impossible if the applicable technical standards were upheld. “But since it is obvious that what is not allowed cannot be the case, they now want to save themselves by illegally terminating the contract”.

“PORR AG, whose participation in the consortium H51 Pfons-Brenner is worth around half of the contract value (€966M before sales tax) will take every step necessary to protect its rights. “The contract is valid. That’s why we won’t be taking the rap for failures of management and of supervision and why we insist that BBT take responsibility for the damages incurred,” concluded Strauss.

BBT SE has defended the contract termination, saying: “Shortly after the award of the largest construction lot in the Austrian project area, major differences of opinion arose between the contracting authority, BBT SE, and ARGE H51. Over the past few days, ARGE H51 went public with their view of the situation in a one-sided and very simplistic way, only mentioning the tubbing rings issue.”

“BBT SE notes, however, that the problems did not concern technical issues, such as the above mentioned tubbing rings (lining thickness). The main reason for the dissolution of the contract is the final refusal to carry out the works and the delays incurred with regard to some essential contractual aspects, thus causing a loss of trust of BBT SE in ARGE H51. However, BBT SE does not intend to disclose details of the different legal positions of the contractual parties – with the exception of the issue of the tubbing rings – in order to protect the reputation of ARGE H51 and not to anticipate useful elements in view of the threatened legal dispute.”

Below is the conclusion of the BBT SE Statement in full:

“The invitation to tender, which was carried out under the technical direction of the former Board of Directors, provided that responsibility for planning and building the tubbing rings with a minimum of 40mm of thickness lay with the contractor. This was designed to give the contractor the possibility to contribute to the project with their expertise. If ARGE H51 believed that a 40cm tubbing ring could not bear the loads, it could have tendered a thicker tubbing ring.

Only after the award of the contract, ARGE H51 stated that the 40cm tubbing ring – tendered by ARGE H51 itself – was not feasible and requested either a thicker tubbing ring or the reduction of the loads at the expense of BBT SE.

BBT SE, as a contracting authority, has always been eager to cooperate in a spirit of partnership with ARGE H51 and repeatedly proposed solutions to the technical problems raised by ARGE H51 as for the tubbing rings. BBT SE very much regrets that ARGE H51 did not accept its support and that this led to serious delays in the Pfons-Brenner construction lot, which could have been avoided if the contractually agreed works had been performed.”

The only way forward

“Considering the lack of cooperation on part of the contractor in September 2020, BBT SE gave ARGE H51 a last chance to carry out the project in accordance with the contract and in a spirit of cooperation. Despite intensive efforts, no solution was achieved and BBT SE had no choice but to dissolve the contract.”

The two CEOs of BBT noted: “As new CEOs we took over a difficult construction lot and worked hard for almost a year to find a solution. A contract worth a million cannot be dissolved in a light-hearted manner; however, we had no other choice, because even the last solution proposed by ARGE H51 on October 5th 2020, was not viable from a technical and legal point of view. The decision to dissolve the contract was not easy for us either. As a public contracting authority, we felt obliged to make this decision in order to ensure proper and legitimate use of public moneys.”

“The dissolution of the contract with ARGE H51 for the Pfons-Brenner construction lot at this point in time, and the subsequent need for a new tender procedure, requires a careful and in-depth analysis of the construction timetable and of the contract award plan. BBT SE will continue to do everything possible to move forward the pioneering infrastructure project of the Brenner Base Tunnel in the shortest possible time.

In complex infrastructure projects such as the Brenner Base Tunnel, unplanned events may occur, the dissolution of works contracts being one such event. The BBT project includes a risk provision, both in terms of construction time and construction costs. Now that the decision on the H51 lot has been made, BBT SE will complete the ongoing evaluation of the construction timetable, assess all possible measures and complete an updated construction program. On the basis of the updated construction program, it is currently being evaluated if the risk provision is sufficient to cover additional costs resulting from the dissolution and adjustment for inflation.” 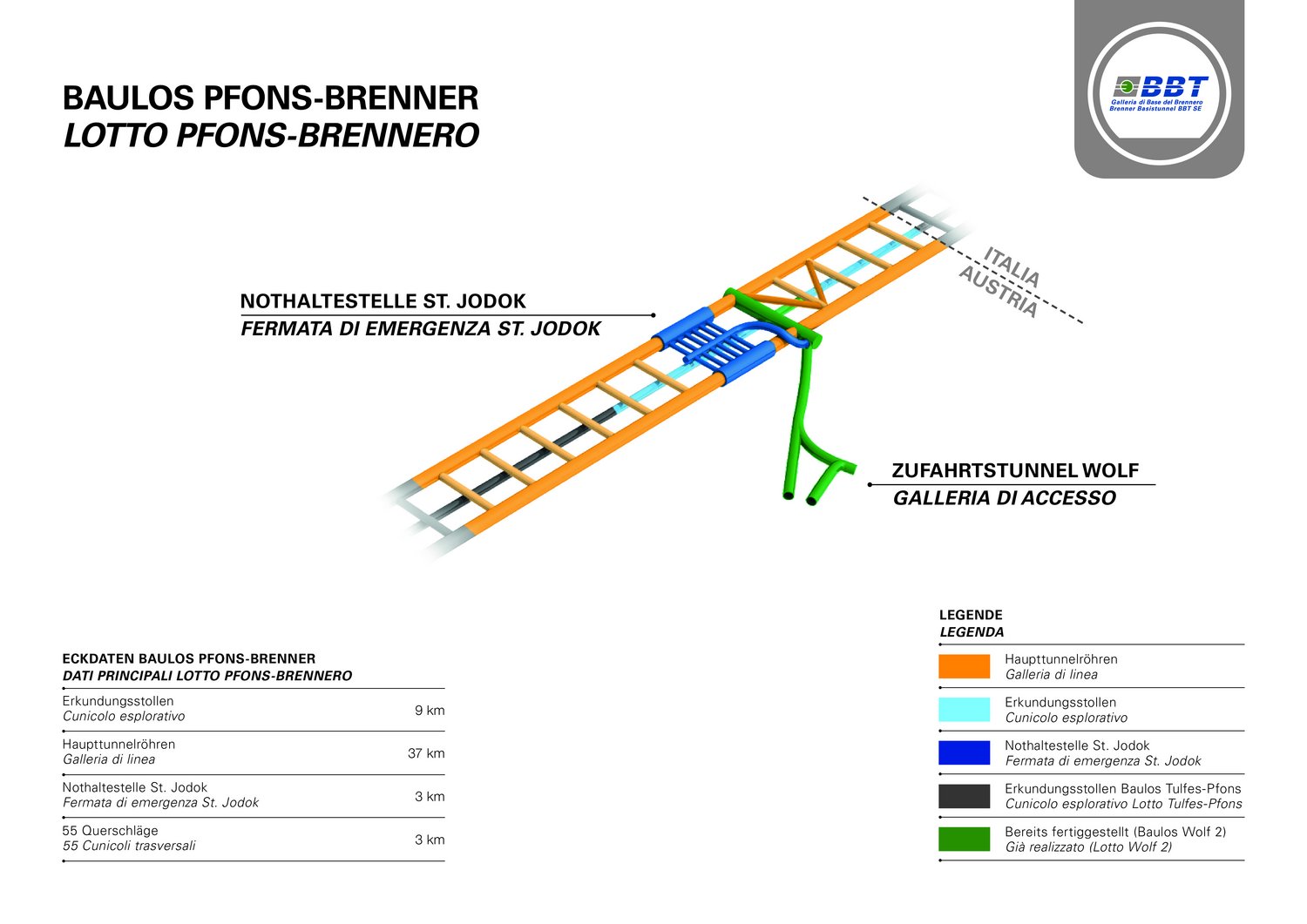