Royal HaskoningDHV has won a 5 million euro contract to lead the design process for an immersed tube tunnel at Brazil’s largest seaport, Santos. The 500m long tunnel will directly link the cities of Santos and Guarujá located on either side of the fairway leading to Brazil’s most important port.

Advice provided by the firm was instrumental in the decision by authorities in São Paulo to opt for an immersed tunnel. A bridge was ruled out due to cost and adverse impacts on the port. The tunnel will relieve the burden on the existing passenger ferry services and significantly reduce driving time for freight vehicles, which must currently make a detour of 50km when travelling to and from the port.

The Brazilian authorities (via the government agency DERSA) selected the experienced Dutch engineers as this is the first immersed tube tunnel to be built in Brazil. Royal HaskoningDHV will lead the design process and oversee its content. 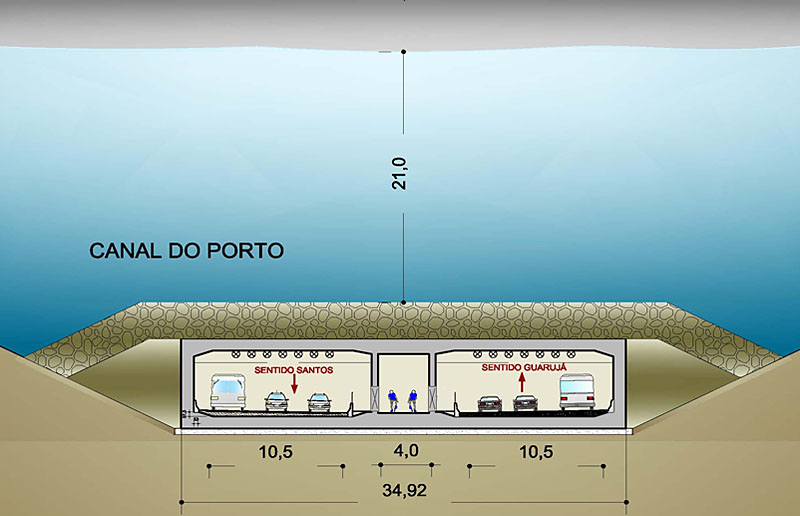 Royal HaskoningDHV and Witteveen+Bos have collaborated on major tunnel projects for 25 years in a partnership called Tunnel Engineering Consultants (TEC). Current immersed tunnel projects include the Fehmarnbelt between Denmark and Germany (19km tunnel), the Busan-Geoje Link in South Korea (3.4km), the Hong Kong-Zhuhai-Macau Link in China (6km) and the Coatzacoalcos tunnel in Mexico (1.5km).