Salini Impregilo has entered the Norwegian market for the first time with the signing of a €388M civil works contract to upgrade a 13.6km section of a rail line between the towns of Nykirke and Barkaker south of Oslo. Salini Impregilo, which heads a joint-venture with Impresa Pizzarotti & C with a 51% stake, won the contract from Bane NOR, the state-owned company responsible for Norway’s railway infrastructure. 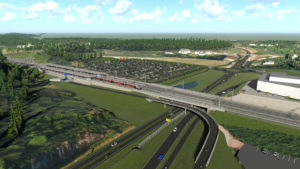 Under the terms of the contract, set to be completed by 2022, Salini Impregilo and its joint-venture partner will design and build a double-track line, including two bridges, three tunnels totalling some 5km in length, and a station near the town of Skoppum.

The project is on the Vestfold Line, which is being modernised to reduce travel times and increase railway passenger capacity. Once completed, travel time between Oslo and Tønsberg will be about an hour, with a frequency of up to four trains an hour in either direction.

The contract is the latest effort by the Group to expand in countries that are investing in infrastructure and carry a lower risk profile, such as Australia and the United States.