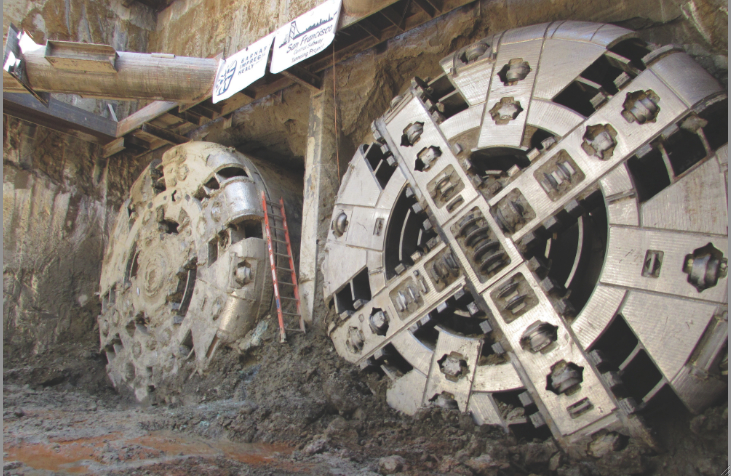 June 11, 2014, marked the completion by JV Barnard/Impregilo/Healy (BIH) of the twin bores on San Francisco’s Central Subway in California, USA, following the breakthrough of the second of two specialized Robbins EPBM being used to excavate the tunnels.

The first of the two machines holed through on June 2, with both machines achieving advance rates of up to 40 in 24 hours and 513m in one month. The Central Subway is the second phase of the San Francisco Municipal Transportation Agency’s (SFMTA) Third Street Light Rail Transit Project.

Two 2.5km long tunnels were excavated through ground ranging from soft soils to thinly bedded siltstone, shale and sandstone bedrock, as well as concrete diaphragm walls. The TBMs were designed with a number of features to efficiently navigate the varied geology, steep grades and turns along the alignment, and to bore in what was rated as “Potentially Gassy with Special Conditions” by Cal/OSHA.  A mixed face cutterhead was selected and designed to excavate the anticipated wide variety of ground, while active articulation was integrated between the TBM shields to lessen the risks of segment damage, ring deformation, and settlement during boring through curves. Robbins continuous conveyors offered efficient muck removal throughout tunnelling.

Low cover, nearby utilities, and sensitive structures required analyses and design precautions in order to limit settlement impact. This was especially true of a crossing directly below live rail tunnels for the Bay Area Rapid Transit (BART). Compensation grout pipes were put into place as a contingency, but were not needed as the machines passed just 3.4m below the rail lines with minimal settlement. The contractor kept a close watch on face pressure, using a mix of foam for conditioning with some anti-clay polymer.

“BIH JV did a superb job driving the two Robbins EPB machines through the tight 137m radius curves and varying ground while keeping a close eye on face pressures, annulus grouting and steering producing settlements well below our estimates. In my book, the EPB technology applied here has set a new standard for what can be done in urban soft ground tunnelling,” said Matthew Fowler, Project Manager for the Parsons Brinckerhoff/Telamon JV design team, who were in charge of utility relocation and tunnel design.

“Careful monitoring of key TBM parameters ensured that we did not impact critical structures above us through the heart of downtown San Francisco,” said Sarah Wilson, Jacobs Associates, Resident Engineer for the project owner SFMTA.

Now that excavation is complete, work on two open cut station sites and one mined site is underway.  When Phase 2 of the Third Street Light Rail Project is complete, the 2.7km Central Subway line, excavated at depths ranging from 15m to 45m below the city, will extend light rail service through the South of Market and Union Square Districts to Chinatown, as well as provide direct connections to BART and Caltrain, two of the Bay Area’s largest regional commuter rail services. Scheduled to open to the public in 2018, the rail route is predicted to serve about 65,000 passengers daily by 2030.