Local media has reported a collapse on Tuesday of a section of the Marginal Tiete Express adjacent to a shaft and tunnel construction site on Sao Paulo’s 15km long, $2.6bn Metro Line 6. 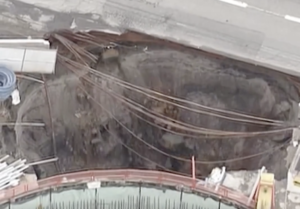 The project is being constructed by Acciona, with no casualties reported. Fifty workers were able to exit the tunnel safely, with only two being treated for minor issues, although reports say the tunnels are subsequently flooded.

According to Reuters, early information on the possible cause of the collapse was ‘conflicting’ with Sao Paulo Governor Joao Doria saying a car hitting a sewage collection system was responsible for the subsequent ground instability.

Reuters reports Acciona’s Director in Brazil, Andre De Angelo as saying, “We are searching for the reasons right now. However, it is likely to have to do with rain and erosion, as this tunnelling equipment was situated three meters from the collector, which means it was not a collision.”

An investigation into the incident has been instigated by State Prosecutors, whilst Acciona has released a statement saying ‘it had taken all required contingency measures after the incident.’