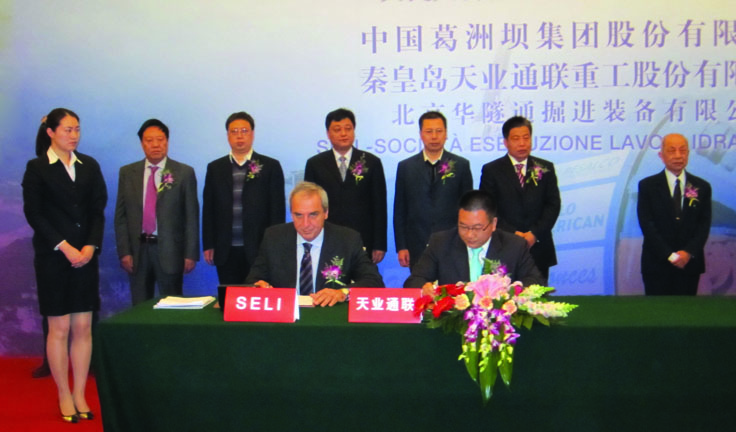 On November 9, SELI directors and top management of the Chinese group, GEZHOUBA, met at the government palace in Beijing to sign a partnership agreement for a collaboration between the two companies as well as the initial supply contract for a TBM DSU Compact.

The contract, valued at US$28M includes: – Engineering and construction phases for the realization of TBM components to take place entirely at the SELI Headquarters in Rome, TBM assembly and testing, to be completed by China’s HST- Hua Shi Tong. HST, in collaboration with Hitachi, fabricates TBMs for the Chinese market. SELI has established a specific agreement with the company for TBM assembly.

Once built, the 8m-diameter TBM will be used by the Gezhouba Group for excavation of a tunnel for the Genale GD3 Hydroelectric Project in southern Ethiopia.

Based on the geological profile provided by the Client, excavation will be 80% class I and II (granite) rock, while the remaining 20% will be class III and V.

The new partnership marks an important milestone achieved through investment in technology and R&D. Over the next three years, SELI expects to produce 10-15 TBMs for the Chinese market.

The Chinese company, Gezhouba, signed a US$451M contract for the construction of a hydro-electric Genal (GD3) Multi-purpose Project in Ethiopia.

The project is located in Ethiopia, further southeast than the previous SELI project Gibe OMO.

Bolts, ribs, and shotcrete in varying amounts depending on the geology will be used. There are no plans to install precast segments.