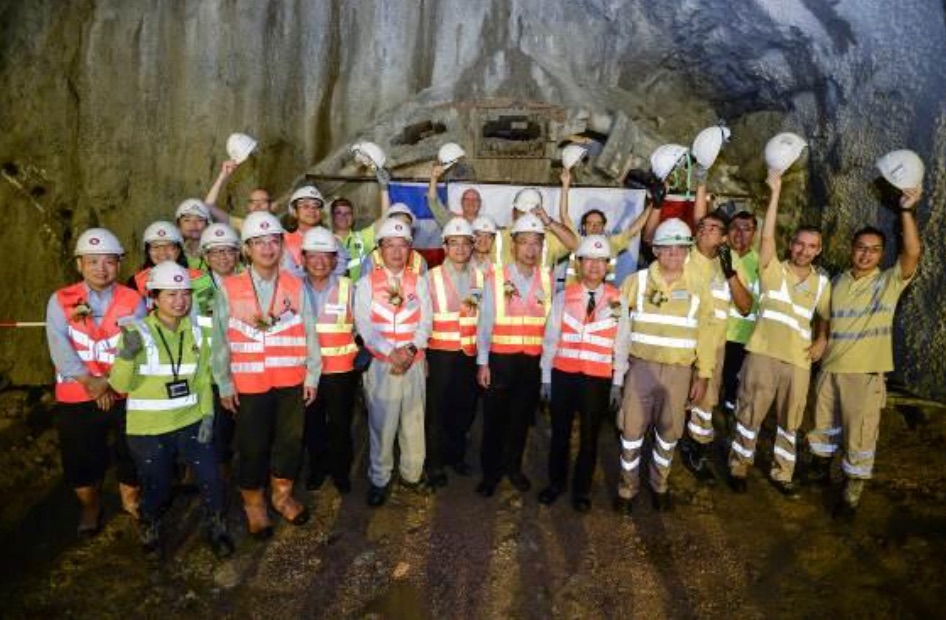 The 5km tunnel stretching from Hin Keng to Kai Tak for the Hong Kong MTR’s Shatin to Central Link (SCL) project is now connected, with the final blast ignited 35m underneath Lion Rock on 11 November 2015.

“This significant achievement is an important milestone in the implementation of the SCL project. We have now completed over 60% of the tunnel excavation works for the whole Tai Wai to Hung Hom Section of the rail line,” said Dr Philco Wong, Projects Director of MTR Corporation. “I would like to congratulate and thank the team for their tremendous efforts in achieving this milestone today. Moreover, we could not have completed the excavation in such a densely populated area without the support of all our stakeholders, including most importantly, residents in the area. Special thanks to the local community for their patience and understanding during the course of works.”

To cope with the mixed ground conditions encountered in excavating the tunnels between Hin Keng and Kai Tak, different construction methods have been adopted:

“The Hin Keng to Kai Tak Section is one of the most critical tunneling works of the SCL project which allows us to run new train services directly from the New Territories to urban Kowloon. On top of the difficult geological conditions at Lion Rock, tunneling underneath the existing railway tunnels of the Kwun Tong Line and various busy traffic arteries such as Prince Edward Road East and Choi Hung Road required great precision engineering,” Dr Wong added.

The SCL is a territory-wide strategic railway project comprising the “Tai Wai to Hung Hom Section” and “Hung Hom to Admiralty Section”. The “Tai Wai to Hung Hom Section” is expected to be commissioned in 2019, providing faster and more convenient train service for passengers. In the future, it will just take around 6 minutes to travel from Hin Keng in the Eastern New Territories to Kai Tak in Kowloon East.