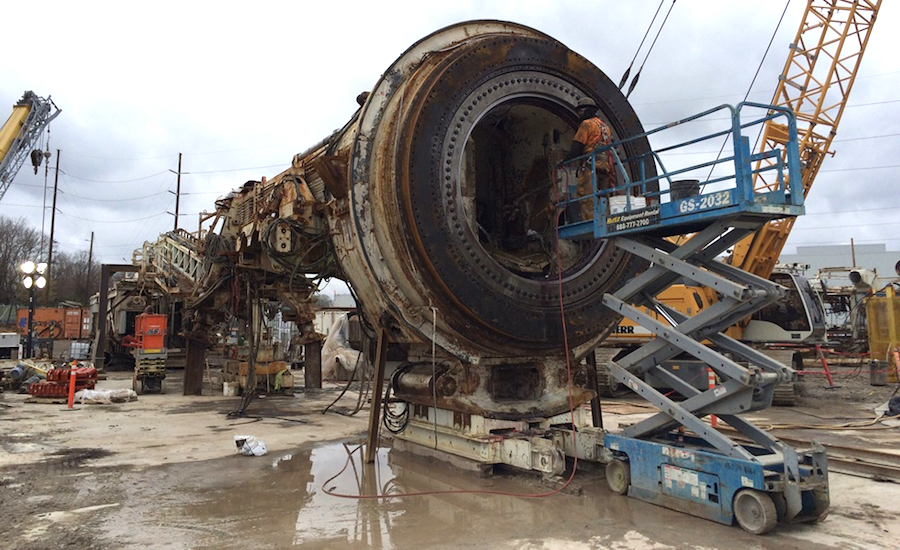 Indianapolis water owner Citizens Energy Group has announced that it will award an estimated $500 million contract to SK JV, a joint venture between J.F. Shea and Kiewit, to complete the remaining 18 miles of deep tunnel and drop shaft work for the DigIndy Tunnel System over the next nine years. The contractor has completed tunneling and 50% of the final concrete liner for the first major portion of the $1.9-billion program, now called the Dig Indy Tunnel System. SK JV began work on the initial 9-mile (roughly 50,000ft long) job, the Deep Rock Tunnel Connector (DRTC), in 2011 and broke through ahead of schedule, in July 2014, with a 20.2ft (6.2m) diameter Robbins Main Beam TBM, which was refurbished and redesigned for the job.

Next steps will include mining the 5.8-mile (9.3km) White River and 1.8-mile (2.9km) Lower Pogues Run tunnels, which will take the TBM directly below the Lucus Oil Stadium in downtown Indianapolis. Under federal requirements, this work needs to be completed by 2021, but the owner says it is scheduled to wrap up a year in advance. Future projects include Fall Creek, at 3.8-miles (6.1km), and Pleasant Run, at 7.3-miles (11.7km), which are slated to finish by 2025.

By letting the remaining tunnels into one contract, rather than several, the owner claims to have saved $70 million in costs (due to re-using the TBM) for a total of $400 million in savings through additional value engineering.

“Our plan to complete the DigIndy Tunnel System significantly under budget while further reducing sewage overflows represents a big win for our customers, the community and the environment,” said Jeffrey Harrison, President & Chief Executive Officer of Citizens Energy Group. “Thanks to the value engineering efforts of Citizens technical team and its partners, such as SK JV, we have increased the savings on the Consent Decree from $330 million to $400 million. Citizens’ original plan required it to prevent 95% of raw sewage overflows from reaching most area streams. Under the new plan Citizens will prevent 99% of potential sewage overflows from reaching area waterways.”

Mayor Joe Hogsett said the DigIndy Project will produce remarkable benefits for the community. “By restoring our rivers and streams to levels not seen in over 100 years, DigIndy will enhance recreational opportunities, facilitate neighborhood redevelopment, and improve overall quality of life across Central Indiana,” Hogsett said. “Citizens and its partner Shea Kiewit have positioned DigIndy as a model for how the public and private sectors can work together to achieve better outcomes for the community and the environment.”