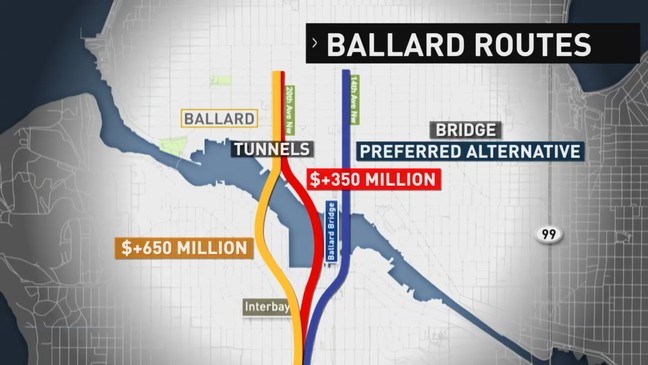 Sound Transit board members have abandoned ideas for a $450 million tunnel into Seattle’s historic central Ballard neighborhood, a $200 million bored tunnel through West Seattle’s Pigeon Point neighborhood, and a fully elevated trackway in Sodo that would have blocked light-rail travel during construction.

The Seattle Times reports that cheaper options that serve the same number of passengers will now gain momentum during environmental studies.

Politicians on the 18-member board have entertained dozens of alignment concepts since 2016, when voters passed the $54 billion ST3 tax measure to expand regional rail and bus services. The agency promised West Seattle stations in 2030 and stations from south downtown to Seattle Center and Ballard by 2035.

A projected 35,000 daily passengers would ride between West Seattle and Sodo, plus 52,000 between Ballard and South Lake Union. Tens of thousands more would use a new downtown tunnel and stations.

Adding pressure, Tim Eyman’s Initiative 976 on the Nov. 5 ballot seeks to slash car-tab taxes to $30 statewide. Even if voters or the courts side with Sound Transit against the Eyman ballot measure, state lawmakers may consider car-tax cuts.

Transit CEO Peter Rogoff is also warning that construction inflation jumped by one-fourth just since 2016, so hard choices lie ahead.

Some board members, including Edmonds Mayor Dave Earling and Everett Councilmember Paul Roberts of Snohomish County, said they won’t vote to add costs to ST3. Although transit taxes are generally spent where they’re collected, the Snohomish officials fear rising project costs in Seattle will disrupt Sound Transit’s cash flow or strain its credit, so less money would be available to build 16 miles from Lynnwood to Everett by 2036 as promised.

The central Ballard route called for a tunnel under Fishermen’s Terminal to 20th Avenue Northwest near Market Street, costing $450 million more than a basic, 70-foot high drawbridge at 15th. A tunnel at 15th might be $100 million less than digging to 20th.

Seattle Mayor Jenny Durkan said the bridge alternative, which she is trying to avoid, would be “as high as Aurora Bridge,” forcing huge approach structures on land, and columns in the water where salmon migrate. The Muckleshoot Tribe, Federal Transit Administration and U.S. Coast Guard would have to sign off, and costs could mount.

The Ballard extension is part of the $54 billion ST3 project passed by voters in 2016. The Ballard to West Seattle project is expected to cost roughly $8 billion. Light Rail is expected to reach Ballard in 2035.