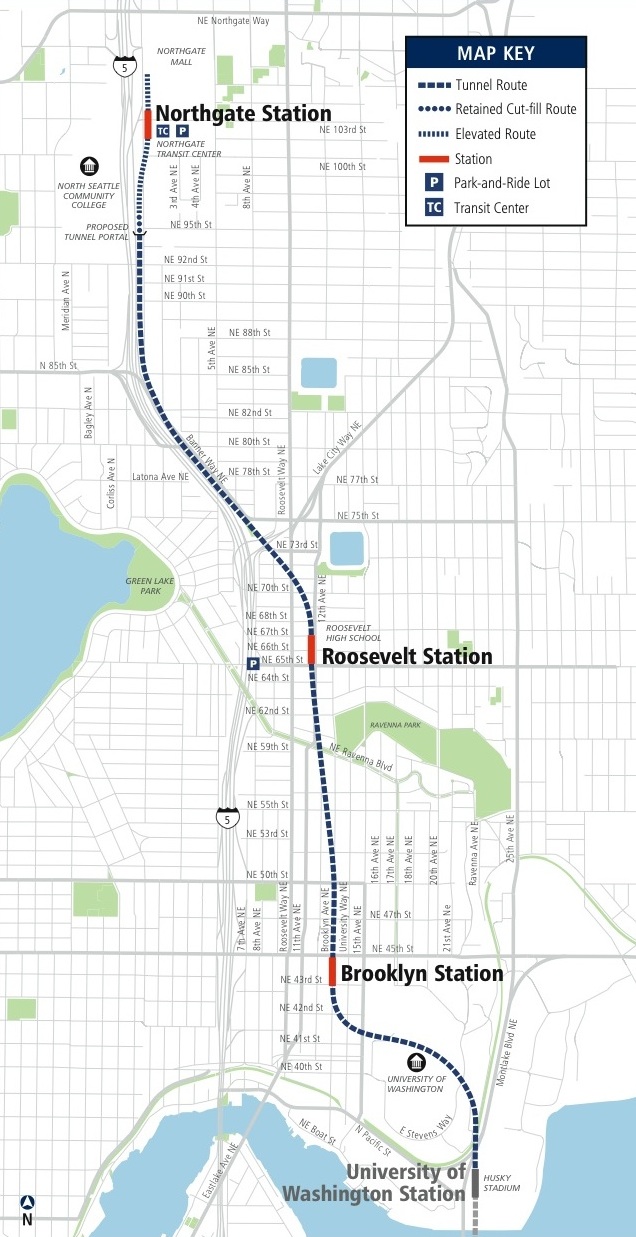 “We have just begun contract negotiations with North STAR, so have not yet arrived at a contract price” Sound Transit spokesman, Bruce Gray, told North American Tunneling Journal earlier this month. “However, we anticipate that the contract will extend until 2021 when the North Link Project will go into revenue service.” The Construction Management Contract will provide a broad range of Construction Management Services, including resident engineering and inspections, quality assurance, safety oversight, environmental compliance and project controls.  “We hope to come to a final price and take the contract forward for Board approval later this spring,” added Gray.

The North Link is a 4.3-mile (6.9km) extension of Sound Transit’s Link Light Rail system northward from the University of Washington (UW) station outside Husky Stadium (currently under construction as part of the University Link). It will run under the UW campus and the University District retail area, northward through Roosevelt up to the Northgate Mall. Most of the alignment will be underground in 21.5ft (6.55m) o.d. diameter twin running tunnels (same as U-Link), coming to the surface near NE94th St, just south of Northgate. There will also be three new stations:

Detailed design of the North Link is currently in progress, with the various stations and tunnels at different stages of design. Construction is scheduled to start in the second half of 2012 with advance works contracts (utility relocations and demolition). Major construction is currently scheduled to start in 2013 with the station excavations, followed by tunneling in late 2014-2017. Station internal structures and finishes, and the Northgate elevated station and aerial guideway works follow later, starting in 2016-17.

The work sequence is still under review, but it’s currently expected that tunneling will take place from the North Portal (near Northgate) mining southward to Roosevelt, and from Roosevelt mining southward to the UW station. Pressurized face TBMs will be required throughout. A total of 23 cross-passages are also envisaged.

Civils construction is currently scheduled to finish in 2019, with systems installation from 2019-2020 and the project opening in early 2021.