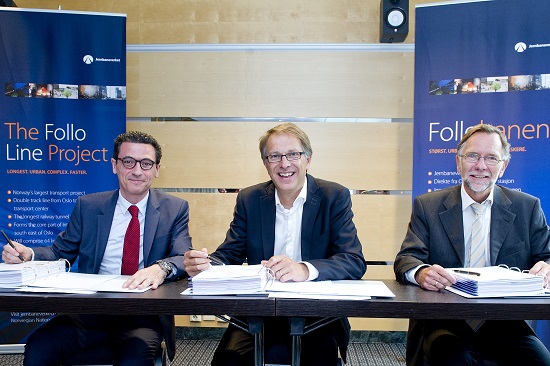 The contract,  one of six EPC contracts for the Norwegian megaproject, covers the public transport hub of Ski and the surface section between Langhus and Ski.

“OHL has become our third main partner to make this megaproject a success. OHL has experience from execution of high-speed railway further south in Europe, and it is a pleasure to welcome the company to Norway,” said Smith on behalf of the Norwegian National Rail Administration and the Follo Line Project. OHL is starting the work immediately.

Companies from all over Europe and Asia have participated to take part in the Follo Line Project. The project is split into the six following main EPC contracts: EPC Oslo S (two contracts), EPC TBM, EPC D&B, EPC Ski and Signal.

In February of this year the 1.2 billion NOK EPC Drill & Blast tunnelling contract was the first to be awarded to Società Italiana per Condotte d’Acqua S.p.A (Condotte). The 8.7 billion NOK (US$1 billion) TBM tunnel contract was awarded to a consortium formed by Acciona and Ghella at the end of March.

Most of the preparatory works for the Follo Line Project, such as alignment of the new line, buildup of the rig areas, blasting of the two access tunnels etc. are now finished. The final preparatory works will be completed during September this year.

The Follo Line Project, starting from Norway’s capital, is executed by the Norwegian National Rail Administration on behalf of the Norwegian Ministry of Transport and Communications. The project includes a 22 kilometer long new double track line between Oslo Central Station and the public transport hub at Ski, a 20 kilometer railway tunnel (twin bore), extensive works at Oslo Central Station, construction of a new station at Ski and necessary realignment of the existing inbound Østfold line. The Follo Line is scheduled for completion in the end of 2021, and forms the core part of the InterCity development southwards from Oslo.