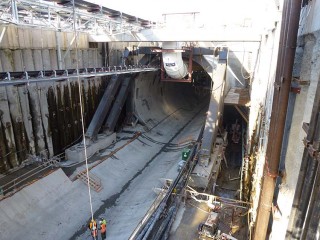 Construction will begin late next month on the shaft STP will use to access and repair damage to the machine, which stopped tunnelling in December. Building the access shaft is the first of several steps STP has laid out to resume tunnelling:

These construction activities will be addressed in accordance with the SR 99 tunnel contract. The updated construction timeline delays tunnel boring by up to 16 months, but STP hopes to recover as much as four months of schedule to meet the November 2016 tunnel opening date WSDOT established in its 2010 request for proposals. STP had proposed opening the tunnel in late 2015, 11 months earlier than the original requirement.

STP has informed WSDOT that crews will replace the machine’s main bearing and install a more robust seal system, which could include strengthening the seals, installing redundant systems, and adding monitoring equipment. Additional details will be included in a plan to be submitted to WSDOT for review by June 16.

The repair schedule will include additional time to accommodate potential improvements to the machine that STP or the machine’s manufacturer, Hitachi Zosen Corp., might choose to make after the cutterhead is removed and crews are able to perform a full inspection. WSDOT will work with its strategic technical advisory team, made up of international and national tunnelling experts, as well as consultants, to review the plan.

Although disappointed by this delay, WSDOT believes the schedule is moving in the right direction, saying in a statement “We’re also focused on the bigger picture, which includes more than $750 million worth of work at the tunnel portals and elsewhere along the SR 99 corridor. That construction is not affected by the tunnelling stoppage and continues full speed ahead.”

West of Seattle’s stadiums, crews are building the future connection between the tunnel and the new section of SR 99 that was completed in 2012 after the viaduct’s southern mile was demolished. Crews are also making progress on the south portal operations building, which will house lighting, ventilation, emergency systems and other vital components needed to operate the tunnel.

Meanwhile, at the tunnel’s future north portal, crews are building the connection between the tunnel and Aurora Avenue North, the north portal operations building and the 80-foot-deep pit where the tunnelling machine will emerge at the end of its journey beneath downtown.

Work is also ongoing in Frederickson, Wash., where crews have manufactured 72 percent of the concrete segments.