September 10, 2020, saw the successful launch of the 5.2m diameter CREC667 TBM, named Peaceful Grassland, which will be used to construct 18.8km of the 58.5km long second lot – No. 2 tunnel – on the Inner Mongolia Chouer to Liao River Diversion Project. The event sees the largest water conservancy project in the Inner Mongolia Autonomous Region (Chouer River into the West Liao River) enter full-scale construction. 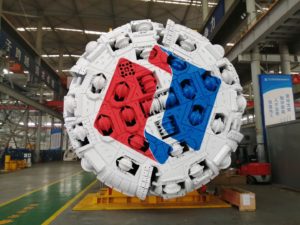 The entire No.2 tunnel is a critical section of the Chouer to Liao River Diversion Project and is characteristed by its long excavation distance, small tunnel diameter, shallow cover, fault-fracture zone, and water-rich formation. The tunnel will be constructed by a combination of D&B and two 5.2m diameter hard rock CREG TBMs, including CREC667, which will carry out the long-distance tunnelling.

The total length of the Chouer to Liao River Diversion project alignment is 390.26km, which passes through the Tao’er River and Huolin River from north to south. To optimize a gravitational water delivery, the project begins from the Hinggan League to Tongliao city, and finally reaches the Molimiao Reservoir at the main stream of the West Liao River. It is one of 172 major water conservancy projects stipulated by China State Council during the “13th Five-Year Plan” period. After the completion of the project, it can effectively alleviate the severe water shortage in the West Liao River Basin in the eastern part of the Inner Mongolia Autonomous Region.