Sydney Metro tunnelling has finished under the city centre in a historic milestone. Four out of five Herrenknecht TBMs are now finished work – all that remains is the completion of a second metro railway tunnel deep under Sydney Harbour. More than 97 per cent of the 6m i.d tunnels are now complete. 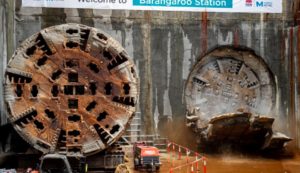 The five Herrenknecht TBMs used on the rail tunnels have been purpose built, with four double-shield, hard-rock TBMs designed to bore through Sydney’s hard sandstone, whilst the mixed-shield slurry TBM is excavating the under-Sydney Harbour ground conditions.

Of the four rock machines, two TBMs have delivered the 6.2km of tunnel from Chatswood to the edge of Sydney Harbour, whilst the other two have bored the 8.1km from Marrickville to Barangaroo. The fifth, slurry TBM is currently boring twin 1km long tunnels under Sydney Harbour.

Hard rock TBM ‘Mum Shirl’ was the fourth mega borer to finish work, breaking through a wall of rock at the new Barangaroo Station.

Since starting work at Marrickville in November 2018, Mum Shirl took about 14 months to build an 8.1km tunnel to Barangaroo, cutting through sandstone and shale to excavate more than 821,000 tonnes of rock. TBMs Nancy, Wendy and Mabel finished work late last year.

About 29.5km of 31km of twin metro tunnels between Chatswood and Sydenham – or 97 per cent – are now complete with TBM Kathleen now digging under Sydney Harbour to finish her second under-harbour metro tunnel.

John Holland/CPB/Ghella was awarded the Sydney Metro, $2.81bn contract in June 2017. The current schedule sees the tunnelling contract conclude in 2021

By 2024, Sydney will have 31 metro stations and a 66km standalone metro railway.